I had a bit of a delayed departure from Oklahoma City. My general target was the Texas Panhandle, but I purposely waited to leave, so that I would have a good idea of exactly where to target by the time I got out there. I left around 9:30 and that put me into the panhandle around lunchtime.

I reviewed data in the morning and noticed that the low-level jet was rather weak looking across the northern half of the target. By late morning, it was clear that convective initiation was imminent. That combined with weak and veering winds in the 1-3km layer, roughly north of I-40, lead me to opt for the southern target. (not Fort Stockton south, but south of Amarillo)

https://twitter.com/i/web/status/1132349015142653954
As I dropped south from Claude, I noticed that a relatively discrete storm was intensifying and moving toward Plainview. I got into position, but it seemed to be outflow dominant. I got gas and waited a bit and then noticed a line/cluster of storms forming to the west. These storms quickly showed signs of broad rotation, but something didn't look quite right. I had a visual on one storm that was clearly organizing, but I'm assuming that relatively weak low-level shear did not allow the storm (near Littlefield) to wrap up. The cloud bases were very grungy and ill-defined, compared to what I've encountered with most tornadic supercells.

Right behind that storm, a new semi-discrete cell just south of Littlefield started to get a more classic look., It appears that some sort of boundary was laid down, along a SW-NE axis, near and just north of Lubbock. Several storms fired near that area and almost all of them showed at least transient supercellular characteristics through the afternoon.

I stayed with the storm and even though I didn't have a clear visual on anything right away, the cloud bases were quite low and it looked like an appendage on radar was attempting to interact with a boundary. The storm briefly rooted on the boundary and I observed what initially looked like a funnel cloud for about 1-2 minutes, from 4:59 until about 5:01 p.m. Upon closer examination, I'm pretty sure this was a brief tornado, although I did not conclusively see the funnel touch the ground.

https://twitter.com/i/web/status/1132409825336418313
There were at least two or possibly three brief reports of tornadoes in the general area between shortly before 5 and about 7 p.m. Based on radar data, these storms were more outflow-dominant than anything and the spin-ups were driven by boundary interaction, rather than more classic supercellular tornado development. The storms had little to no discernible structure.

Looking back, even into late afternoon when these funnel/brief tornado reports came out, low-level shear was still on the marginal end for tornadoes. It did not help matters that storms developed so early and by the time the low-level jet did ramp up, there was an extensive MCS in progress across Oklahoma/Texas.

https://twitter.com/i/web/status/1132416298854567937
One of the aspects of this chase that made me uneasy was just how bad the flooding situation was in and around Lubbock. I know they are prone to flooding, but just about every dirt road I encountered was impassable. Many segments of the I-27 service roads were under water and other paved roads were also blocked due to high water.

As we continue through this active severe weather stretch, there is a lot of real estate from the southern High Plains into Oklahoma and central/southern Kansas that is experiencing significant and locally historic flooding. It makes chasing an already tough pattern even more difficult, but also potentially dangerous.
Last edited: May 26, 2019
Reactions: Shane Young, Jeff House, Joshua Nall and 4 others

Quick edits before bed, but I enjoyed a slow moving supercell across Northern Missouri this evening that sported absolutely spectacular structure and a top tier lightning show. I sat in Mount Pleasant, IA all afternoon watching and waiting for something to develop and sure enough around 6pm a supercell fired up in North Central MO. I dropped south and watched it approach me east of Memphis, MO from 15 miles away until it was on top of me. It had quite the wall cloud at one point, however the lack of surface inflow kept it pretty tame, so no tornaodes....but WOW I was blown away by the structure and lightning combo. Here are a few shots... 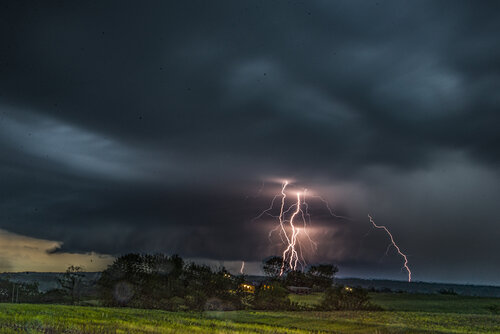 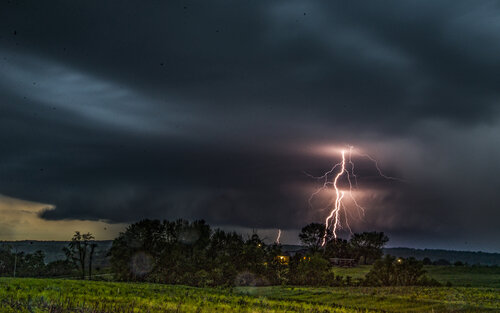 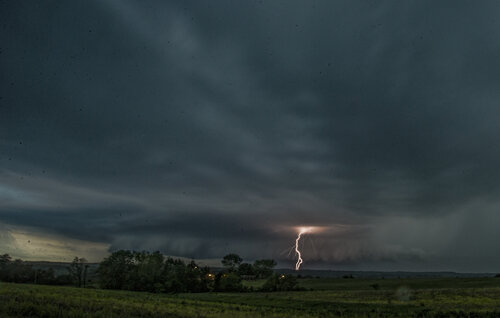 I didn't see a single person the entire evening either, was really quite peaceful. Doesn't make up for blowing yesterday, but it's definitely a start and I only had to drive an hour and a half for it.
Reactions: Jeff House, GPhillips, Joshua Nall and 6 others

My chase partner Steve Komie and I began the day in Amarillo. RAP model was more aggressive than NAM as to backed winds and dryline convergence in parts of the TX PH, particularly south toward the latitude of LBB, along the TX/NM border west of there. RAP actually had a high SIGTOR in the area. I didn’t buy that verbatim of course, but liked other modeled parameters and the fact that the LBB/PVW area already had backed winds before noon, whereas other parts of the panhandle did not. I was still looking at two other areas. One was the TX/NM border between Clovis and Bovina, near where RAP was hinting at somewhat of a dryline bulge and better backed winds later. Another was extreme southeastern CO, which was really the only place north of LBB that both RAP and NAM were showing backed winds by late afternoon / early evening. We had no interest in going all the way down to Fort Stockton and its road void. This area was also clear of stratus already. HRRR seemed to show isolated cells in the northern and southern targets but was also showing quick upscale growth. We only had a couple hours drive to any of these targets targets so we waited until after noon to see how actual conditions shaped up.

We saw on radar the first storm down near LBB go up, and quickly a line of cells popped almost at the same time along the TX/NM border north of there. We decided against the LBB target area due primarily to the road flooding we had experienced the day before. I had examined a map of flooding reports and road closures, and the new storms would bring back whatever water had already receded. The early storms going up so quickly were another factor; I anticipated a repeat of the prior day’s clustering of embedded supercells in a training line with storms heading into the road and cell void east of I-27. We decided to go for some potential Colorado magic, and were heartened by the Pueblo AFD midday update mentioning discrete supercells.

In Boise City we saw a bunch of other chasers and some tour groups. After grabbing some snacks and checking data, a cell went up in extreme southeast CO so we went northeast to Elkhart to intercept it on its northeast trajectory. We got a view of the base from route 160 near Manter. It never looked great, but we enjoyed the near-continuous growling thunder while at the same time birds sang in the foreground. The line of chasers was crazy, I mean nothing bad happened and it was completely manageable, but I just couldn’t believe that on a day like this with multiple targets there would still be a line of cars like that in the middle of nowhere.

Anyway, to make a long story short, this one isolated storm was soon killed off by all the activity coming up from the south and east out of the panhandles. Pretty soon it didn’t even have a severe warning. It wasn’t practical to get around to the east side of the other storms, and even an SPC MSD indicated that the show was over as upscale growth had fully transitioned to an MCS. We called it a day fairly early and drove to Garden City for the night.
Reactions: Shane Young and Dan Robinson

I started my day in Plainview and headed north. This was another event with early promise dashed by storms firing in the target by midday. The only viable area that remained without early-day convection was east of the dryline in southeastern Colorado, and a nice storm initially fired there by midafternoon. After encountering a road snafu where the highway dead-ended into mud at the Colorado state line north of Elkhart, Kansas, I finally arrived on the storm south of Manter, KS. I found it rather high-based and anemic, with strong outflow and RFD working in concert to kill surface inflow. I followed the storm to Johnson City, missing a reported landspout from the storm. I decided to head east to try and catch up to a more robust complex of cells moving northeast toward Dodge City to at least get some lightning video. As I did this, a new storm fired just ahead of me over Ulysses, Kansas, sitting over the town for more than 30 minutes. When I reached the town, deep flooding had already rendered the roads and streets impassable. With no route east, I was forced to turn south, losing my ground on the Dodge City storms and ending up out of position for catching up. Despite it being only late afternoon, I was out of chase options. I booked my room in Dodge City and arrived there before sunset.
You must log in or register to reply here.
Share:
Facebook Twitter Reddit Email Link
Top Bottom