I don't think this was on anyone radar. But it looks like we might get some good warm sector recovery on Wed. Previous 3-km NAM showed the WS staying capped all day. Now today, we have several CAMs showing a nice theta-e axis developing by mid-day along the I-35 corridor and convection developing in the aftn. Looks like there is a shortwave coming through in the aftn according to the RAP. Tds will rapidly advected north with values in the low 70s likely.

The tradional dryline looks diffuse and out along OK/TX border. But there is a sharp gradient along the Theta-e axis. At the very least this mornings 12z runs will catch peoples attention. UPDATE (5 minutes after posting):
Just looked at the 06z TTech WRF and it is very aggressive with tomorrow. Even more so than the HRRR. It has multiple rounds of initiation.
Reactions: Jeff House, Terry L. Schenk, Eddie Natenberg and 1 other person

00z runs are coming in and it looks like this day is trending up.

All of the CAMs that i have looked at show storm development in the WS. The most conservative of them is the 3-km NAM. It does show CI in the early afternoon but looking at a sounding shows a pretty decent cap. I am using the area soundings form Tropical Tidbits. Fast forward 3 hours and you see that the CAP has eroded and is gone by 21z. However, the 3-km NAM kills off the convection. Not sure why... are we missing large scale forcing? Any ideas? Nonetheless, the other CAMs decide that 21z is the right time to start firing lots of supercells. The WRF-NMMB isn't as bullish as the other WRFs (NSSL, ARW, TTech). However, it does still fire convection by 00z. So what does the least bullish CAM (other than NAM) look like at 00z? Here you go... The HRRR caught everyone's eye earlier today. But we didn't want to bite just yet. Now that other CAMs are coming into more agreement, perhaps tomorrow is a day we should keep watching.

There are lots of updraft helicity swaths from each member. CAPE should be aoa 3000 j/kg. Models show a nice juicy theta-e of 350K or more, so if a storm is surface based it should have a nice robust updraft.

Some of the CAMs show re-initiation after the first wave. Which i just don't get. These storms are not initiating right on the DL. So what is going to cause CI?

Agreed. This not even in a severe risk this morning and as of this evening, NWS Norman had this as slight risk in Central OK. Loving the soundings out of OKC for this day. Cells will be discrete as well as warm front plows northward and low with attendant dryline set themselves in W OK. Nam 3k is sounding the alarm bells on this one. Wouldn't be surprised to see this classified enhanced risk by SPC later on tonight in Day 1 outlook
Reactions: Jeff House

First apparent caveat is rising heights, but virtually all models now convect by mid-afternoon across central/eastern Oklahoma, including global models, CAMs and HREF. I tried digging up some analogs, but wasn't able to find any good matches that I felt were representative of the apparent severe risk. 5/9/03 is a good match for the synoptic and surface patterns across the western half of the U.S. However, rising heights were more subtle that time and there was a wide arcing area of severe convection from the Plains into the Midwest and mid-Atlantic region. This setup for tomorrow has a more pronounced ridge across the eastern U.S. with somewhat more substantial height rises over the Oklahoma vicinity. I almost wonder if the models are convecting too much, although this setup would be even more alarming if there was only convection on a very isolated basis. Either way, I'm really not sure what to put up for a forecast, aside from saying that the background ingredients are there for all modes of severe weather, assuming there is sustained convection, which most signs do point toward.

A TREMENDOUS problem with today's setup from a logistical standpoint- MANY roads are closed in the target area. That, with the horde problem we saw a few days ago, has me very worried.

The flooding issue is going to be a major factor today. To compound ongoing flooding, storms will likely train over northeastern Oklahoma and vicinity, making an already bad situation even worse.

Anyone who is chasing has to be aware that escape routes may be impassable. Have multiple backup plans and keep a distance where possible. You would not want to encounter a chaser traffic jam with an intense storm approaching and the only way out underwater.
Reactions: Donnie H and Brian McKibben

I definitely have a location bias since I am working till 3, but there is a northeaster target that has been relatively drier (there are some roads closed proximal to the MS river on the MO side due to protracted river flooding) that I have been watching. This has sort of been underplayed by some of the forecasting agencies, including NWS for the most part, but they may catch on as trends continue today. As a notable mid-level perturbation associated with broader energy aloft swings over the mid-Missouri valley, and 10m absolute vorticity increases across the northern MO valley, CAMs are advertising convection firing in a mostly discrete manner along a line from KC-COU-KEOK and moving ENE. There is some CINH early on that should suppress storm development until closer to 23z/22-00z/23, though as H85 theta-e values increase closer to 00z, these storms will have a favorable environment to produce severe weather, with favorable LCLs, very ambient MLCAPE profiles, SFC-6km bulk shear values AOA 60 kts and favorable SRH in the lowest 3km, although 1 km shear values are mediocre. Hence, tornadoes are not out of the question, along with damaging winds, though significantly severe hail reports look less likely based on profiles aloft.
Last edited: May 22, 2019

Visible satellite at 11 am shows a possible boundary intersection in northeast OK. WF is lifting north of course. Some sort of convergence or gravity wave curls northwest from the mountains of west Ark. Intersects northeast Oklahoma. Other gravity waves noted farther south.

Today is somewhat spread out, even if the probabilities and parameter space max out over the northeastern Oklahoma area. There's conditional risk closer to OKC where the mid-level temperatures will be more steady or slowly rising. Northeastern Oklahoma appears to be the bulls-eye, but many are opting to stay north into southeastern Kansas to try to avoid some of the worst flooding. It's not the best chase terrain, but you could make an argument for parts of central/western Missouri as well. West-central Missouri, in particular, had some decent terrain, but that starts to go downhill east of I-49.
Reactions: Jeff House

Looking at Google Maps and state DOT maps to try and anticipate flooding areas. Doesn't appear to be many major routes marked closed, but I don't know if those are comprehensive. Google traffic maps are showing no data on several major roads, those are suspect.

In the Salina region, nearly every dirt road and non-gravel pull-off was questionable (soft, slick and muddy). I encountered one pull off where I would have gotten stuck 10 feet off of the pavement if I'd continued farther onto it (I got out and walked on it to test). I would expect the same in today's target regions.
Last edited: May 22, 2019
Reactions: Jeff House

Looking at 1-min visible meso-sector. A storm tried to pop SW of Wichita Falls. Went all the way up, shot out a brief anvil and then quit. So it looks like the warm temps down there may be enough to overcome the CAP. 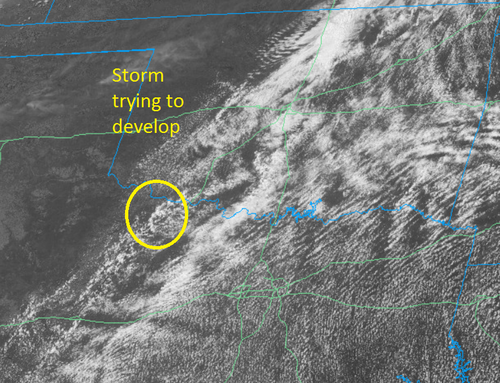 The 18z OUN sounding surprised me a bit with how much warming there is in the mid-levels. The 700mb temperature rose from 5.2C at 12z to 9.0C at 18z and notice several warm layers/noses between 800-650mb. I think models are simply overdoing convection near and south of OKC, especially with a bit of a mid-level thermal ridge, not completely unlike what we saw on Monday.

https://twitter.com/i/web/status/1131268586733998083
With that said, any storm that does fire, and I do think coverage will probably be isolated in northeastern Oklahoma, will have a high likelihood of producing very large hail and tornadoes. It's still a delicate situation, but I am very skeptical about widespread storm coverage anywhere southeast of roughly I-44 in Oklahoma from OKC to the MO border.
Reactions: samuel stone and Mike Z

Another PDS watch for central and southwest Oklahoma on Wed. However, storms just didn't seem to get rooted into the BL and couldn't get going. Oddly enough there was finally a long track supercell in SW OK but it waited until 10pm to form.

I saw someone post a satellite image on twitter similar to the one above that showed a nice arcing band of clouds along the i-35 corridor. Every storm to the east of this feature decided to play ball while the ones to the west had a miserable day. Not sure why. I didn't look at surface obs. But from water vapor it looked like they were on the leading edge of the shortwave.

I am not sure which model performed the best. Based of the 12z runs, I would have to say the WRF-NSSL and WRF-NMMB. I would even say that the 12z HRRR did okay. It didn't really blowup any convection south of I-40 and west of I-35. It kept the good stuff in NE Okla and SW Missouri.