Originally was on the way home from our chase in SW Oklahoma when we approached a tornado warned QLCS northeast of Springfield, MO. Near the town of Marshfield, MO we came out of the gust front region to a tornado tearing up the field about 100 yards away. It took me by such surprise that I missed the strong drillbit phase of the first tornado, but caught a photo of it tearing apart trees and got great video: 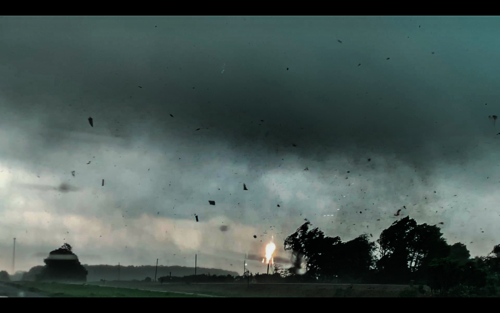 A new tornado formed from a separate area of interest off to my north and become a strong drillbit like vortex. Whiile these were QLCS tornadoes, they acted like aupercellular tornadoes with their rigorous motion and high visibility. 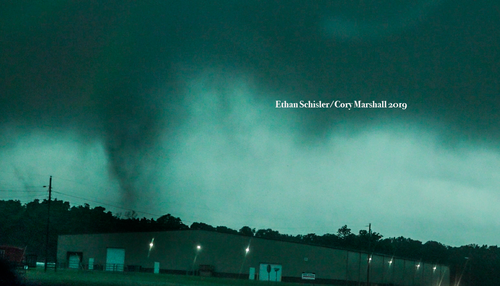 Another vortex spun up in front of me further down the road crossing the interstate about a mile ahead of me. 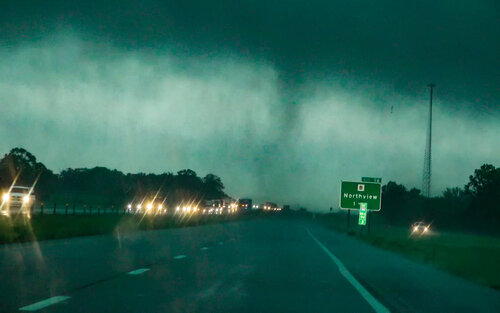 Another possible area of interest became evident to my north with tornadic motion, I'm not sure if this was a tornado or not, but these tornadoes were carousing around it like they were satellite tornadoes. The below image was taken before the tornadoes developed, the right edge had strong vertical motion. 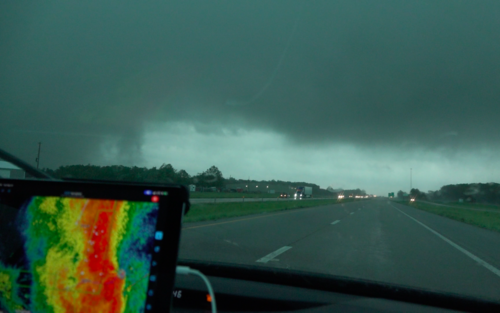 I continued eastward tracking the line of storms, it appeared elevated and outflow dominant until it got to the St Louis area. The terrain became horrible and I couldn't keep up with the storm. I got a visual of the mesocyclone about 3 miles southeast of Augusta, MO looking northwest before the terrain took a turn for the worst and trees fell across the road with 60 mph RFD. 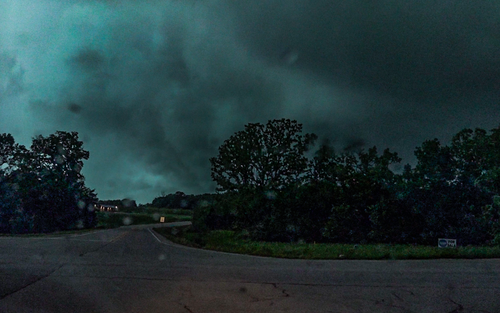 That was about the best view of the likely significant tornado that I could get. Can't really say that I saw it as it was mostly rainwrapped. Still with a few tornadoes on a day I didn't expect to chase and to top it off a top tier sunset near Bowling Green, MO.....you won't catch me complaining 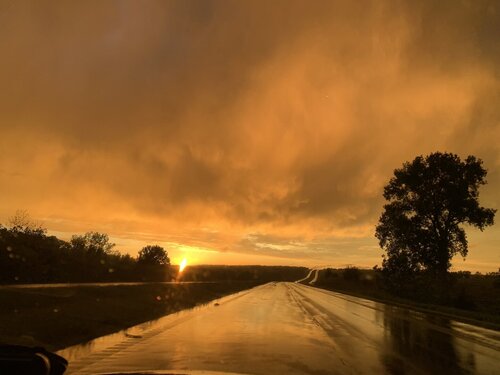 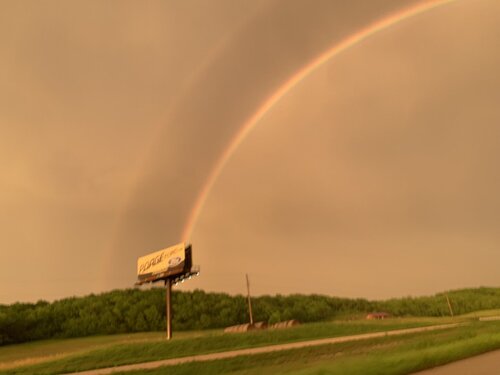 I left Clinton OK and picked up a storm just North of Wichita KS that became tornado warned for most of the day. We ended up in a bad position due to traffic and bad decisions which made for another day of playing catch up. While still trying to catch up, my brother’s wife FaceTimed him. She was FaceTiming him from their house North of Topeka and she flipped the cell phone view around to show him the tornado that was going by their house! She let him know that this whole storm chasing thing isn’t reall all that hard. I ended up getting this cell phone pick later on from a distance as that storm dropped a nice stove pipe by Sabetha KS 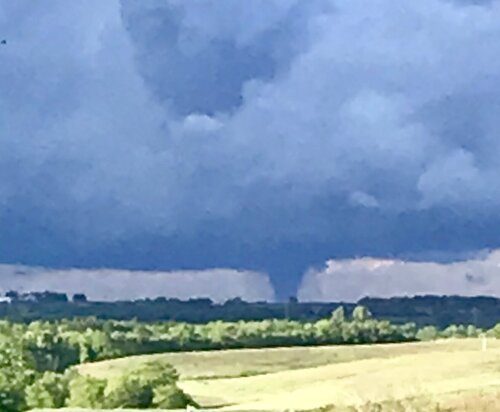 Had to work with students later than expected, so I couldn't reach my original target near Junction City before it produced. Stronger than forecast heating helped storms form a little further east from the low than expected, and a nice low-top supercell formed near Topeka and tracked north towards Atchison, KS. It began to produce a lovely wall cloud with rapid inflow 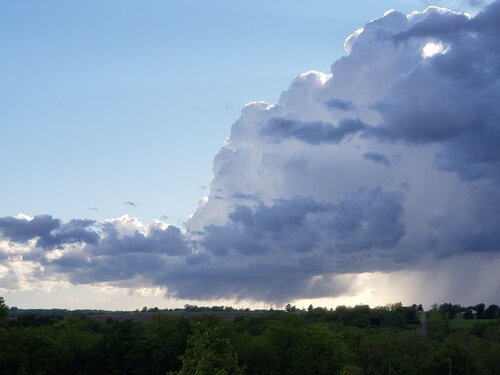 I like staying well east of storms like these, because the low-top structure is neat. It did produce a relatively short-lived, but photogenic tornado near Effingham KS 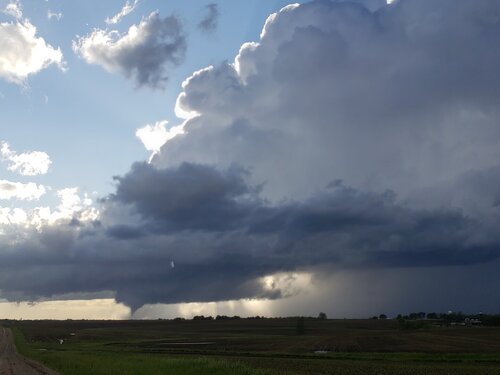 The storm maintained nice rotation for about an hour more, including several funnels, but I could not confirm further touchdowns. 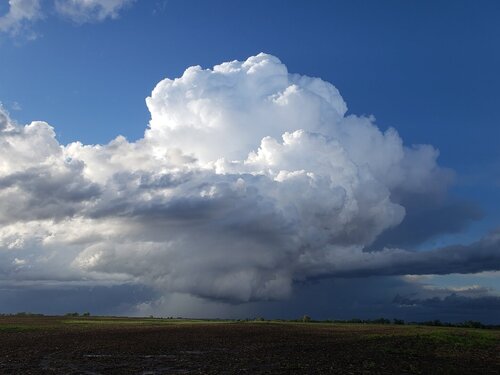 Got off work and left Manhattan as a cell was producing tornadoes south of Chapman KS. Raced out to intercept on US 77 just nw of junction city. If you're not familiar with the area fort riley blocks all road access to the east here. So after I saw the tornado had no choice but to let it go. Here is the tornado about to cross US 77 about 4 miles nw of Junction City. Had no time to stop so snapped photo from inside my car. Tornado continued across fort riley for a ways after this staying over range land. 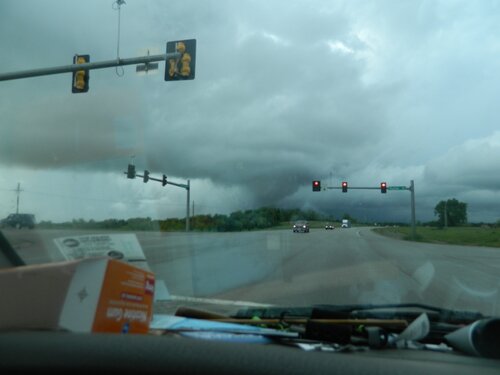 Got off work early last Tuesday and blasted north to catch the Effingham, Kansas tornado! 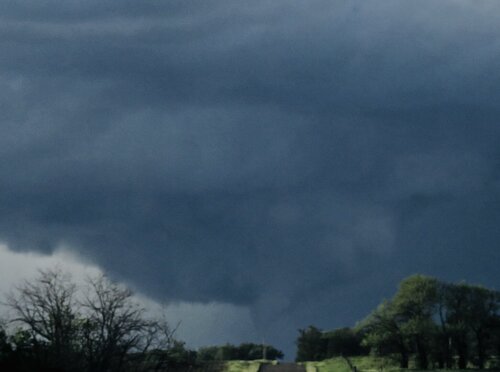 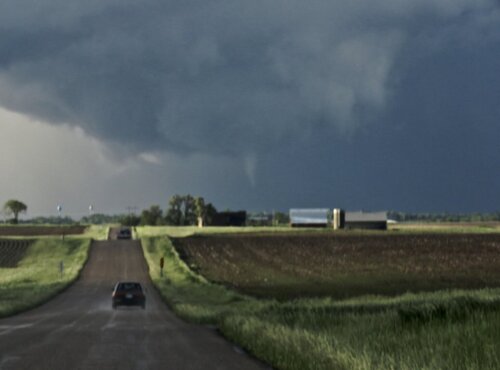 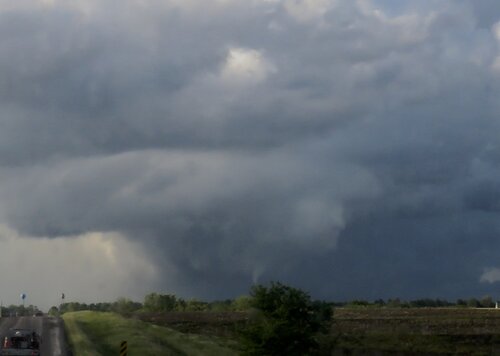 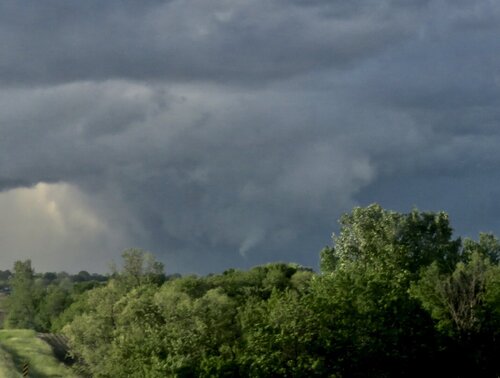 Beautiful structure as the Effingham storm raced off to the northeast. 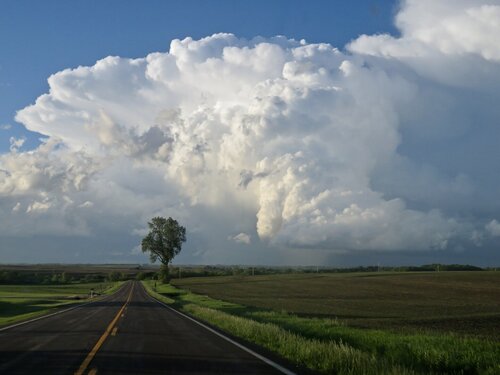 Starting in Lawton, I headed north this day for a cold-core tornado setup in central Kansas. I elected to not go home for the tornado risk in St. Louis due to probable rain-wrapping issues with any storms there. My surface observations data feed stopped updating early in the afternoon, so I lost awareness on the northward-moving boundary. This kept me out of position for the tornado event north of I-70 in northeastern Kansas. Saw some briefly severe storms near Lyons and Salina. Ended the day in Wichita.