On Sunday, October 21st, tropical moisture was in place over Arizona, with a low impinging on it from the west. So southwest flow was in play over the Mogollon Rim Convergence Zone (MRCZ). Work had been a bear and I’d been dealing with a chest cold the previous few days so I wasn’t exactly eager to get out. But I felt better by Sunday morning, and was watching conditions and browsing HRRR/UofA WRF CAMs. HRRR had been pretty set on some stronger storms initiating and moving across the MRCZ, from Twin Arrows through Winslow. RAP surface vorticity suggested elevated vorticity in that same area. WRF CAMs didn’t have the same consistent signal, but with HRRR being so interested in it, I figured I’d mosey out there around 1-2PM and see what was up.

While I was out running an errand, radar showed convection trying to fire. It was pulsing inside a notch in the convergence boundary that had formed southeast of Flagstaff around 12:30PM. That was earlier than I expected, so by the time I was on I-40 heading east, one cell was already looking pretty good. With 30ish knots of bulk shear, I was mainly interested in some brief structure. 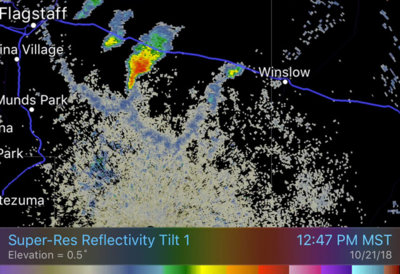 As I got near Buffalo Range Road, about 12 miles from the cell, it looked like a funnel was poking out of the southern tip of the base. So I started the cell phone rolling video on it.
About a minute later, 2058Z, dust appeared on the horizon where the funnel was aimed, so landspout! You never know how much time you’ve got, but I didn’t want to pull over on the interstate. Fortunately, the Two Guns exit was just a couple more minutes down the road. Once I got there, I realized terrain to the west was going to hide the point of ground contact, but I couldn’t waste more time hunting down a better spot. 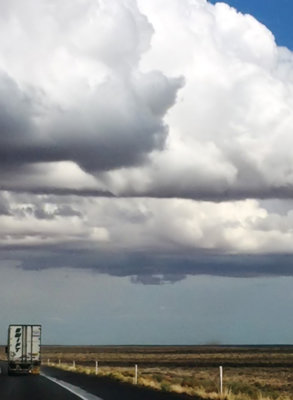 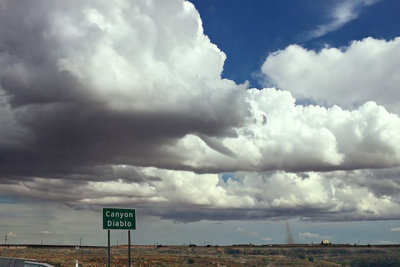 The condensation funnel gradually stretched down into the lengthening dust column. With the sun reflecting off orange dust and white vapor, it was more stunning than I could have hoped for an Arizona tornado. It’s one of the sights I imagine when heading out for a Plains chase — wondering if I’ll catch a high-definition, colorful rope-out among other things. And there I was, 30 miles from home, watching it happen on a Sunday afternoon.

— 2104Z —
Looking east-southeast from the east side of Two Guns 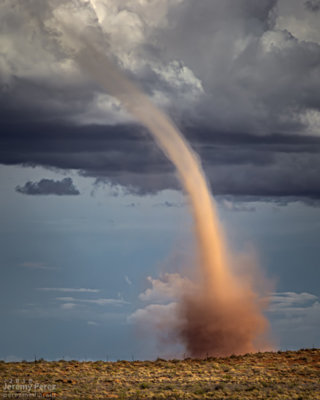 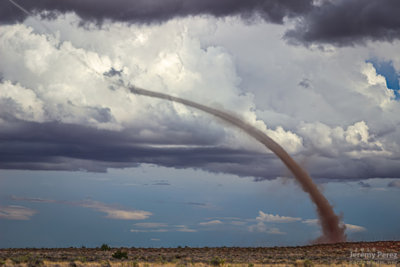 While the storm continued drifting northeast, the base of the landspout drifted slowly southward, stretching the funnel longer as they separated. It dissipated after about twelve minutes, lasting from 2058-2110Z. 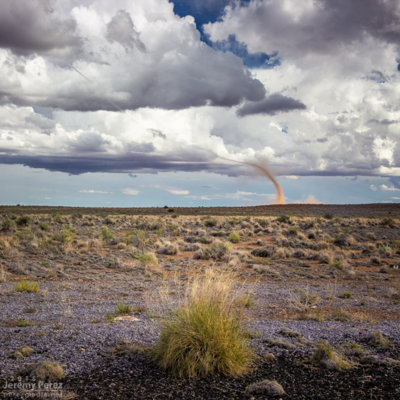 Once it wrapped up, I made my way up Rt 87 north of Winslow to see what new development might look like that way. I got some time lapse running at the Painted Desert Rim View and watched rain, hail and sunbeams roll across striped buttes and hills. Around this time I got a request from 12 News Phoenix for an interview. They were okay waiting a couple hours so I could finish up and get to a spot with better than 1x coverage. On the way back to Winslow, an isolated cell near Mormon Lake eclipsed the sun and while grabbing shots of that, I had a couple cars honk and wave as they drove by. I couldn’t tell who they were, but It kind of added to the feeling of being out on a Plains chase. 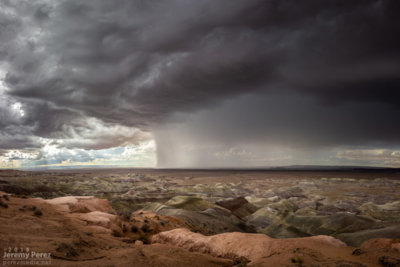 Down by Winslow, I grabbed a few last sunset shots and did a FaceTime interview with Ryan Cody. Funny to see a news camera set down on a desk and aimed at a cell phone to capture the interview. I barely watch broadcast news anymore, so these things are surprising to me.

— 0035Z —
Last light on receding storms from north side of Winslow 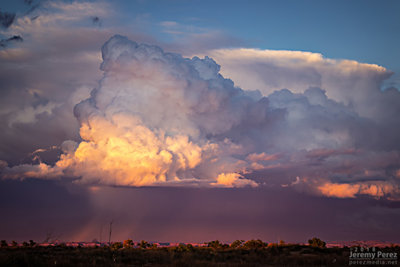 Based on information available at the time, SPC plotted the tornado report further north than I think it actually occurred. I drew up my line of sight in on Google Maps. Then using another series of shots from a visitor at Meteor Crater, I lined those up over the top of a recognizable structure which put it directly north of there. So that puts it over a rocky outcropping about a half mile east of Meteor Crater Road and 2 miles south of I-40.

Watching video later, it was fascinating to see the outer sheath of dust rippling downward around the smooth inner column. Such a spectacular thing. And then there’s the strangeness of chasing over eight years, a couple dozen tornadoes later, and suddenly in 2018 to finally get landspouts on three different chase days — two of them a half hour from home. Wish I could say I now feel more confident in being able to forecast and catch this special kind of twister. But no. The needle gets mixed to a different spot in the haystack each time. That really makes it rewarding when it pans out though. 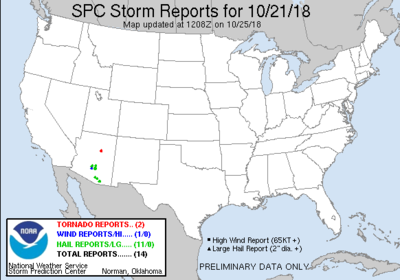 Staff note
I know it has been some time since someone posted a more significant reports thread here, but remember that REPORTS threads are only for displaying firsthand accounts. Follow-up questions and praise should be left to the EVENTS thread for the same date or relegated to private messaging. If there is not already an EVENTS thread for the date, then you will have to create one.

Hi Jeff, since I was the only forum member on this storm, and I appreciate the interaction, could we have a mod change this to an EVENT thread? (I'll try to remember to do that for future AZ chases)
You must log in or register to reply here.
Share:
Facebook Twitter Reddit Email Link
Top Bottom