Arizona is not prime territory for supercells. Moisture, instability, and shear don't superimpose often. The tail end of monsoon season is when that exciting combo is most likely to happen. And it set up perfectly this year on September first. This wound up being my best storm chase in Arizona yet, and rises above a lot of Plains chases.

A few days before, GFS was sparking my interest, hinting at a shortwave moving over monsoon moisture. By two days prior, 3KM NAM was indicating enough instability, bulk, and directional shear for supercells with tornadoes as a potential hazard. The day before, another AZ chaser, John Sirlin and I discussed target options. The MRCZ area on the Navajo reservation looked good early on, with options gradually moving southeastward toward New Mexico later in the day. John wound up driving north overnight to avoid Labor Day traffic and was in the Winslow area to catch an early morning shelf cloud over the Painted Desert.

I finally got moving and was hanging out on Sand Springs Road northwest of Tolani Lake by 1830Z. The sky was clearing after the morning storms and new convection was bubbling along Hwy 89 north of Flagstaff and gradually moving into the Little Colorado River Valley. The new cells struggled for a while, but even in their meager state showed they wanted to shear downstream and spin. 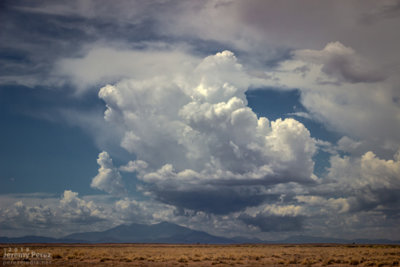 By 21Z, a line of convection from Tovar to Garces Mesas was strengthening rapidly. And doing so further east than I was expecting. I raced to Tolani Lake and headed east on Indian Route 6820--a road I haven't traversed before. It led me across dusty plains, mud pits, semi-dry washes, and encroaching dune fields as storms darkened to the north.

By 2130Z, I was about 10 miles east of Tolani Lake and the lead cell was directly north of me. It had an inflow tail, RFD cut and was showing a velocity couplet on radar. Fifteen minutes later, a wall cloud was evident, but contrast was poor and I couldn't tell what it was doing. Dust was getting dragged into the storm, encouraging me to find spots to stop that weren't obscured by trains of cascading dirt. 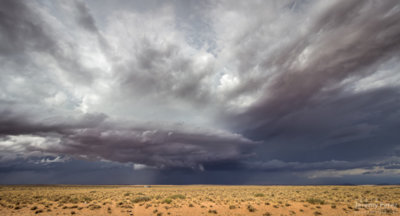 At 2147, the wall cloud got fairly pointy, but I was still too far out and squinting through a bright sunlight to tell what was going on. The velocity couplet intensified at this point and the storm received a tornado warning a few minutes later. I just kept shooting photos and video in hopes of enhancing contrast later to see what was back in there. I wish I could have tightened zoom on video, but sun was too bright to finesse using the LCD viewer, so I had to keep it wide. That's happened to me before. I need to work out a solution for that. 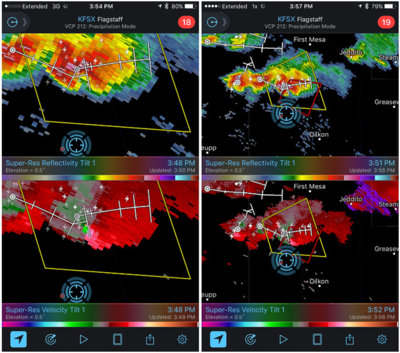 2148-2152Z — Reflectivity/Velocity Scans with the storm at its peak

Pulling detail out of the shots and video later clearly showed rotation in the wall cloud. From 2147-2148Z, shots picked up a funnel rotating with the wall cloud. A couple zoomed images show what could be debris beneath the funnel at ground level. Right after this, the entire scene flooded with inflow dust and I had to move on. 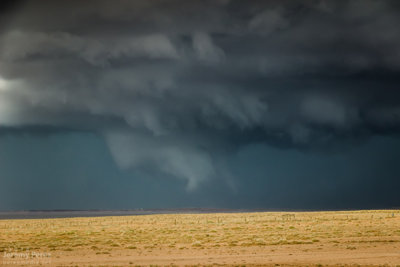 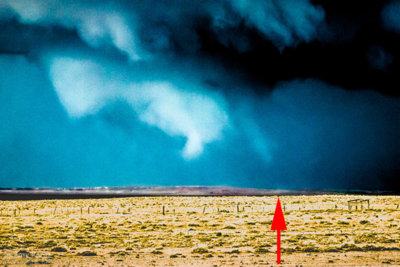 Meanwhile, over the last hour, John was right up under the storms, picking up at least one convincing tornado (to my eyes) at 2123Z, followed by other shots that I can’t wait to check out.
Last edited: Sep 24, 2018
Reactions: Rob Wadsworth, Harrison Cater, Jeff House and 2 others

The RFD cut on the storm grew and continued to look promising, but I got detoured by a washed out section of road near Honey Spring and lost track of things making my way back to a different road. By 2213Z, the circulation had fully occluded and looked like a huge ice cream cone as a burst of hail and a high-based, roping funnel draped around it. 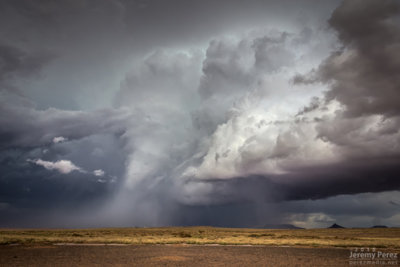 The entire time this cell was being awesome, two other trailing cells were also spinning away. The middle one wasn't faring too well and seemed to be riding elevated behind the lead cell's outflow. I figured the third in line would be dealing with the same thing. However, it managed to hop south far enough to get surface based. So, eight minutes after the great ice cream cone view, I glanced over my shoulder and saw an awesome cow catcher RFD shelf scooping out of its base. Over the course of about five minutes, it picked up a shaggy wall cloud/tail cloud combo. 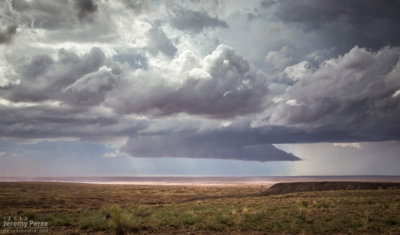 It's both an awesome and frustrating problem to have two beautiful cells competing for attention with spectacular volcanic plugs taking turns hiding them with each turn in the road. The lead cell was moving into lower instability and weakening, but still looked awesome and I didn't want to lose it. So I kept after it, figuring the trailing cell was headed my way anyway. I just needed to get to a spot where the terrain would let me see them both.

I finally found that spot just east of Dilkon. The lead cell was losing its battle to remain surface based. But before it went fully elevated, it wrapped up one last occlusion. Not as beefy as the previous one, but still lancing out with one last funnel. 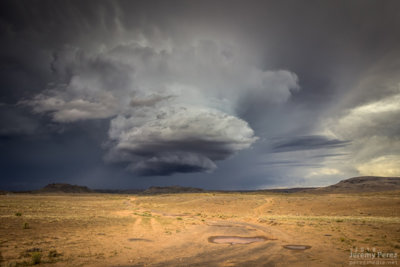 Meanwhile to the west, the trailing cell was getting a classic, sculpted look. At 2307, I realized a knobby wall cloud was dipping down out of its base. It was tough trading focus between the two storms, and wish I had been shooting the trailing one just a few minutes sooner, since reviewing radar later showed a low CC value under that circulation at 2304Z. Would love to have a few zoomed shots at that point. 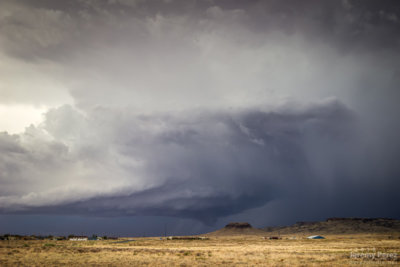 As the lead cell withered away, I set up for a time lapse of the trailing storm as it approached. It was a perfect spot with the stacked base spinning, morphing, spitting lightning, and draping feathers of precipitation as it aimed slightly to my south. 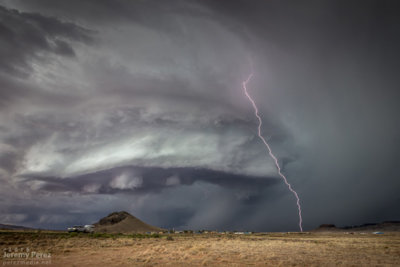 2351Z — Excellent lightning display as the next cell approaches

As it moved in, a new line of convection had filled in and was advancing quickly, shoving a low, gnarly shelf cloud as it tried to catch up to this spinning monument of rough pottery in front of me.

Staying ahead and in good position with that isolated cell seemed like a simple thing. I was planning to jog south on Rt 77 to Holbrook to get parting shots of it and pick up whatever new developments were inbound. But radar was showing me that the trailing line was getting serious, loaded with some big hail, and quickly expanding. I realized if I didn't start hustling, it might cut me off from my planned route south, and punish my wife's car in the process. So I only had time for quick stops or through-the-windshield shots as that isolated cell started to gust out and merge with the approaching line of storms. It wish I could have spent more time along that road. It looked down on an expansive, almost alien landscape with warm, late afternoon light flooding beneath approaching storm bases and greenish cores dumping on blackened buttes and red cliffs. Such a fantastic view. 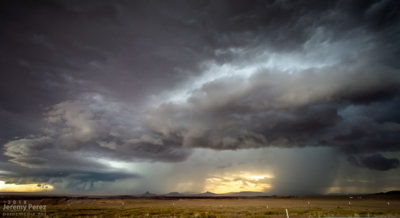 With just a few miles to go before reaching I-40, radar showed that line of storms accelerating into a bowing segment with a very menacing load of hail. I wanted to get onto Hwy 180, but to do so, I had to head southwest on I-40 into Holbrook before catching 180 back east. I had a tough call--either bail east at I-40 to escape the looming core, or jog in front of it to get to 180. When I got there, it looked like I had enough time to spare and I made for 180. That turned out to be a very tense six miles. The wind was picking up ahead of the dark, towering column of hail, and bits of ice were starting to hit as cars and trucks began hesitating, not sure what to do. I finally breathed easier as I got around the curving arc of monstrous ice and heading back east on Hwy 180. The views were incredible again. The bowing segment was reorganizing and developing a mesocyclone as it sailed over Sun Valley. The core looked fierce as the sun lit it in orange highlights agains black shadows. Around this time, the travel stop where I had to make that tough east-west decision was getting torn up by baseball size hail. 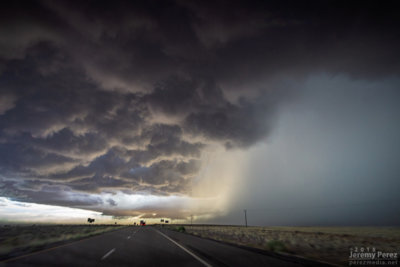 0103Z — Wall of hail rapidly approaching my route to Holbrook 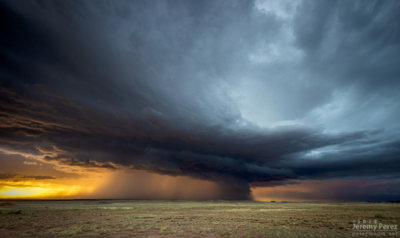 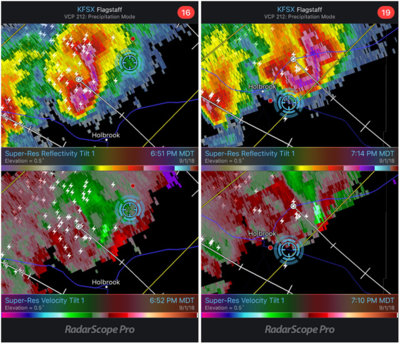 The big hail-maker continued onward to the east, spitting lightning as it departed. Further to the west, another cell was working on a weak mesocyclone of its own. Not as persistent and strong as the others had been, but still winding up a beautiful storm. As sunset and twilight deepened, the lightning from that cell served up a perfect combo of purple strikes on an orange and yellow sky. 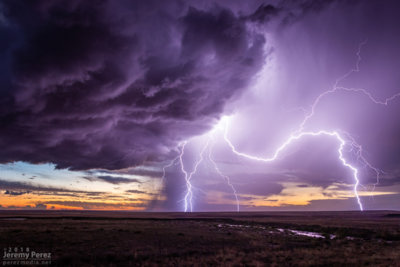 A short time later, John and I caught up and shared a few stories and LCD previews before heading off to attempt some final sprite photos. No sprites for me, but still a serene view of Mars and the summer Milky Way drifting westward as distant storms flicked light across bubbling cloud tops and coyotes yipped amid the surrounding hills.