For those of you unfamiliar with this park, it is located in the northeastern U.P of Michigan sandwiched between Muskallonge Lake and Lake Superior. In Michigan and likely anywhere in Midwest/Great Lakes Region, this area is statistically the least likely area to have severe thunderstorms, let alone a significant severe event.

Note: I am not presenting this event because it affected so many people, but merely the fact that it was so interesting to me meteorologically, especially considering the location: Lake Superior almost always keeps the shoreline too stable to support notable convection, at least surface-based.

Of main interest to me is the thunderstorm complex that had grown upscale in eastern Minnesota the night before. This produced damaging winds there and in the western U.P. overnight before moving northeast over Lake Superior and outrunning the instability. An outflow boundary and some sort of MCV remained over the western part of the lake, which fired off convection during the late morning hours.

Here is the surface chart from 15z that morning (with my own edits): 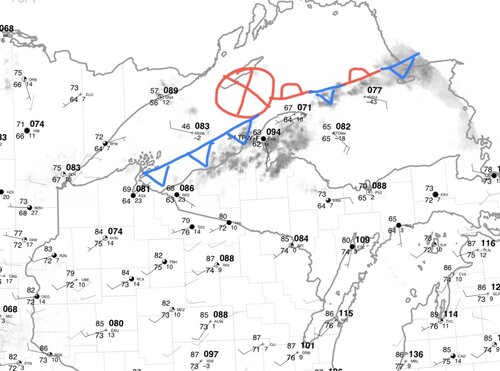 Note how warm the temps were already that morning, not even specifically near the lake, but inland. Mid to upper 80s surface temps existed across northern Wisconsin and northern Lower Michigan. In fact, on their morning sounding, Green Bay recorded an 850 mb temp of 25C which is near record levels that far north. This also indicated the presence of a strong EML that acted as CIN for any storms to pop-up inland. If any strong front could break the cap, storms would be explosive with all the instability and wind shear present. But with it seeming like a very low chance, NWS Marquette and Gaylord basically wrote off the chance for storms until that evening/night with the main cold front.

Most of this near flare up of storms fizzled out quite a bit, but once it crossed over the Keweenaw Peninsula, a dominant supercell emerged over the southern part of lake. Note at this time that water temps were barely at 50 degrees, meaning the storm was almost certainly elevated.

I saw this storm intensifying as I was looking through weather data for the day, and I actually managed to take a screenshot of Marquette’s radar about a half hour before it came onshore. 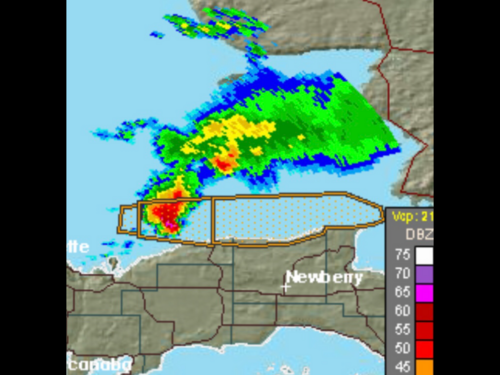 You can clearly see the high-precipitation supercellular structure to this storm on radar, but I did fail to get any recordings of velocities. 65-70 dbz likely correlated to baseball-sized hail already pounding the lake with no one to witness it, unless any unfortunate freighters were out there.

Now here is my edited version with frontal positions: 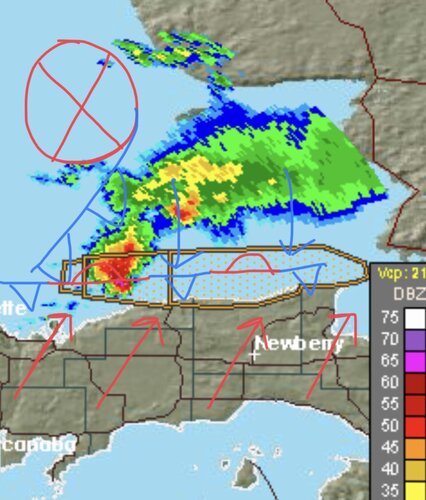 Not only did you have the main MCV with its associated cold front, but also a second area of potentially stronger convergence: the lake breeze. There was a decent southerly breeze this day from the main low in northern Ontario, but there was also a northerly flow on lake where all the cold air wanted to push inland (your standard summer lake breeze in Michigan). The southerly breeze was slightly stronger than the lake breeze, so the convergence was pushed just off shore, which is exactly where the supercell initiated and intensified. The combination of the MCV’s frontal lift along with the breeze convergence allowed these air parcels to break the cap and lead to this explosive thunderstorm. The converging winds led to a huge, intense mesocyclone, and with the steep lapse-rates above 700 mb, massive hail looked probable.

The southern flank of the supercell came on shore just west of the state park (due north of Newberry). The highest reflectivities moved right over the state park about 5 minutes later. NWS Marquette issued a severe thunderstorm warning for far northern Luce county for 60 MPH wind gusts and quarter-sized hail, but almost immediately after issuing the warning, they got a report of tennis-ball sized hail at the park, so they appropriately opted to beef up their wording.

Tents, awnings, campers, cars, (you name it), were destroyed by nearly softball-sized hail (highest official measurement was 4 inches in diameter), but a bit of melting may have meant some stones were near 5 inches. This seems likely to me, simply because no one was out and about right after this storm; everyone was shocked at what’d just happened at this beautiful state park where typically the only extreme weather is heavy lake-effect snow.

These are a couple of the best pictures I saw. The windshield was that of a *parked* car: must’ve been some huge hail. 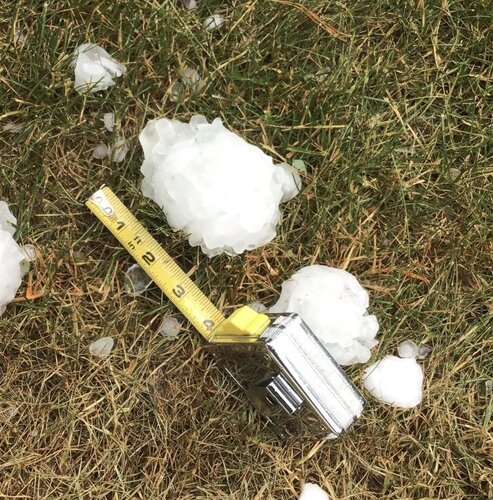 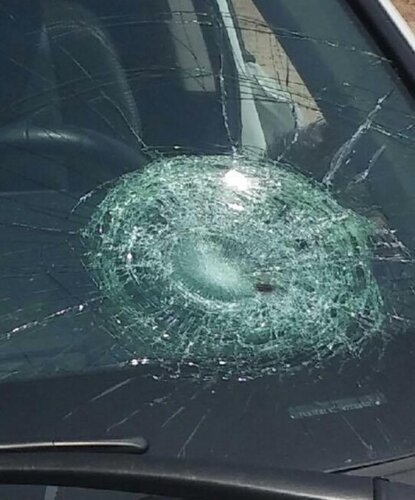 I think had this storm somehow ended up as surface-based, this could’ve ended up as a large tornado. To support hail that big, you need very strong rotating winds in the meso to suspend them, so had it gotten to the ground, things could’ve gotten interesting.

Also of note was that no wind damage was observed with this storm. It was probably windy, but damaging winds in the RFD definitely had a hard time reaching a ground through the stable marine layer. Just another something to emphasize that this storm was elevated.

Michigan‘s largest hailstone ever recorded was of softball size (4.5 inches), so the fact that 4 inch stones were measured in this typically extremely unfavorable area is just astonishing.

Marquette ended up writing a summary about this shortly after, which I read, but they never posted it to their “event summaries” page. So I’m not sure how to find it now. Hopefully they didn’t delete it. However, I think I laid out generally the most important pieces to this.
Reactions: Michael Norris, GPhillips, Chad M and 1 other person
You must log in or register to reply here.
Share:
Facebook Twitter Reddit Email Link
Top Bottom