Excellent chase day yesterday in West Central Illinois for being local. I managed to chase 2 different tornado warned storms that exhibited supercell structure at times. The first being north of Kewanee and came about as close to anything I've ever seen, to producing a tornado. Rapid descending motions in the RFD and rising motions as well, however it couldn't tighten up well enough to drop anything. The second storm I dropped south to was between Bradford and Toulon, IL in Stark County. This storm exhibited the same features, however this time around 7:15pm, it tightened up enough to drop a tornado in this location (3SW of Bradford, IL). Tornado was on the ground around a minute and had an absolutely textbook occlusion before it roped out. I continued chasing the storm further east, noting a couple other occlusions and attempts at an additional tornado, however nothing else touched down from my vantage point. Although the storm still exhibited dramatic RFD structure at this point. I called the chase at sunset and headed back to Galesburg to have dinner after what I consider a highly successful day! I managed to leave home after 4pm on a last minute chase, document 2 transient supercell-type storms and a nice tornado. I didn't even grab my DSLR or actual video camera for this chase, so I just used my Iphone. This doesn't bother me though, I'm starting to appreciate more just being out there observing storms versus trying to wrestle with mounds of technology. So here are a few low quality images: 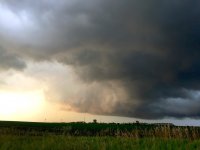 I also shot a couple minutes of video of the tornado that I may upload at a later time. Overall a very satisfying day though, considering my expectations.


I also want to note that meteorologically, I was pretty impressed with the vigor of these storms (being under them). There was a NW to SE oriented outflow boundary on KDVN radar yesterday evening and I believe this is what contributed to these storms exhibited tornadic/supercellular characteristics at times. The first one briefly interacted with the boundary from my experience, however became undercut by it as the boundary motion was due south/southeast. The second storm however, managed to latch onto the boundary and gain a due easterly component which I believe helped it in tornadogenesis. Surface winds overall were pretty lackluster yesterday, however near-storm environment winds were out of the southeast gusting in excess of 20 knots.

Sorry for rambling on so much! That's all I have right now. Enjoy!
Reactions: kevin-palmer, John Farley, Jeff House and 3 others

Came back to visit the plains after a 1 1/2 of being in California. We came for mainly for a wedding this weekend, but i saw tornado potential monday and tues and got a early flight since ive missed chasing so much. I Forecasted to be on the triple point for this day. Rap should me some nice tornado potential around the SD/MN/ND boarder. Storms fired right near the low and would gradually put down some brief tornadoes. Finally it put down this one that went right by Wilmot, SD and lasted 16 mins. At it's strongest point it did rip out a tree from the ground as seen in the video. It was a perfect little storm. Not much rain or hail and we were able to get pretty close. After this tornado died we witnessed 2 others that were brief. It was good to be back in the plains again and to know I still got it after a 1 1/2 off. 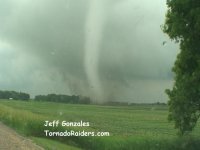 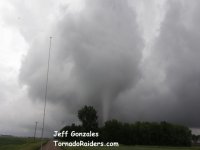 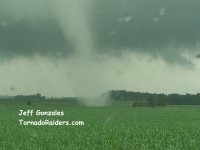