My chase partners Jon Stone, Amy Phelps, and I targeted the Lawton area because we liked the better moisture and clearer air in that area. After spending a few hours chasing left splitting storms we got the brief elephant trunk tornado that touched down around Central High, OK shortly after 7 PM. We were a few miles behind the tornado warned storm and we almost lost it thanks to a small conga line of locals and a farmer in a big tractor that took up both lanes of the road we were on slowing us down. When we got on highway 7 were successfully able to perform a hook slice and got ahead of it just as the rotation was increasing at the base and then produced about a minute or two later. It's not the best tornado I've seen but I'll gladly take it after a frustrating year of chasing so far.

Like many others, I chose the "middle target" on the nose of moisture convergence along the dryline south of Medicine Lodge, KS. The storm of the day (in this target anyway) went up near Freedom, OK and after several splits, a right mover finally emerged and reached peak intensity near Capron (north of Alva). I parked one mile east and north of the Highway 281/Highway 11 intersection west of Capron and was treated to quite a show of rapid motion as the RFD punched in hard just to the south. It was all in vain however, as the left split racing north from Canton/Fairview slammed into the forward flank of the storm and killed it. Northerly outflow surged from the forward flank southward and undercut the occlusion. I believe if this had occurred just 20 minutes later, this may have had a good shot at a tornado. Here is a timelapse of this:


I followed another left mover to the west of this, which was producing some nice lightning and (supposedly) hail as it raced north, but little else. I called it a day at Pratt and headed to Emporia for the night. I'm rendering out my 4-way dashcam timelapse from the day now, and will post that as soon as it's done. Despite Spotter Network showing very dense chaser numbers, traffic was routine, peaking at Capron. I didn't observe anything that could be considered bad behavior. I'll just let the video do the talking.
Reactions: Kat_H

This started out as a rather stressful chase as I reluctantly abandoned my morning target of Coldwater, KS for southwest OK. I started near Clinton, OK and dropped south watching more left splits at one time than I have ever seen before. How depressing! It eventually became apparent that the southern cell moving toward Lawton was the only play. It took nearly an hour to get to it, but my group and I managed to slice the hook and catch the tornado near Pumpkin Center right as it formed.

I had a decent chase day in Oklahoma. Started off early morning near Blackwell with a few lightning shots then eventually got on the Lawton-Marlow area storm. Had just turned east when we saw the Central High, OK forming behind us. Found a turn around to get a view but it was becoming rain wrapped and bad contrast. Drove back to Houston Sunday night and we all know what happened Monday....

I targeted Greensburg coming down from Goodland after a great day in Colorado (Wray etc) ... I moved South from there and was on initiation by Fort Supply Oklahoma just as it happened. Below pic is from a hill immediately South of Freedom Oklahoma ... at one point I think everyone was there. I followed this sucker until it was just about to drop a tornado (East of 281 along Highway 11) then I sliced my tire on the only steel drain on a dirt road in all of freaking Oklahoma. I was dead in the water but it was fairly flat there and I would have seen it drop still if it had not been slammed into and died.

I had a bust but learned a good lesson---> Have a fast raise/release floor jack for my Tundra ... I have one shipped out now so changing will be much quicker now on the 120 lb off road tires.

Second photo is just a photo by friend Allison took of me speeding along North of Alva to get the about to be tornado ... obviously pre tire slice.

Full:
Left Moore around 10:30 AM, stopping by the TWISTEX memorial near El Reno on the way. Lunched in Weatherford, then settled along a pull-off along U.S. 183 just north of Arapaho, arriving by 2 PM. This was surprisingly early for us to be in our target area. In my chasing history, I've almost never arrived in the target area more than an hour before initiation. Anyway, we baked under the sun for a good 90-120 minutes until anything happened. We both actually went for a run back and forth along the pull-off. I ran at least one mile.

We went back to Clinton to grab some water after our workout, then returned. Shortly after returning, we finally spotted developing agitated CU up and down the dryline statewide. The most vigorous development was concentrated across far SW OK, however. There was some development occurring to the northwest, but we eventually opted for the southwestern target.

Unfortunately, 'S'-shaped hodographs made an appearance (see my post in the EVENT thread). The first few storms were moving northeastward, and thus left-splits became dominant and right splits noticeably struggled. On the way towards one storm to our southwest that appeared to have rooted and was turning right we passed in front of a left split that showed impressive structure for an anticyclonic storm. Predictably, the right split died as we got to it. There were additional storms to the south and southeast of our storm, so the stream of unstable low-level air was also being cut off by storms upstream. Unfortunately we were already a good 40+ miles (as the crow files) behind the southernmost storm, which was the only one still ingesting undisturbed environmental inflow, and actually had turned pretty hard to the right and was moving nearly due east. It also had thrown off a left split that was raining tennis balls on its way across W OK, partially blocking a route around the storm.

I figured we were done at this point, although we had two hopes remaining, but I figured both were low probability:
1) the initial storms had really flown off the dryline and into the warm sector and had left a significant area in their wake with clear skies just ahead of the dryline, and some Mesonet obs suggested cold pools had not yet completely spoiled the environment. Sure enough, shortly after noticing this, new updrafts began to build off the dryline back to our southwest, putting us in great position should any of them become a new supercell. Unfortunately, the area of undisturbed atmosphere between the first storms and the dryline was limited in extent and was quickly overturned by expanding cold pools moving in from the east, so our new updrafts struggled mightily and died. That left us only with hope #2:

2) Make a mad dash for the southernmost storm. We were northwest of it and it was moving east, so logistically, catching this storm was going to be difficult. In most cases, you don't win that race. However, we had a few things going for us. For one, there was basically no traffic, as everyone else was off to the east with the left splits and Tail-end Charlie. Secondly, we had a great road network to take us to the storm despite the presence of the Wichitas - both U.S. 183 and U.S. 62 are well maintained high speed highways, and 62 is four lanes all the way between Altus and Lawton. Thirdly, the storm had really put on the brakes - only moving east at probably 20-30 mph. We actually began to run into the back of the core just as we reached the west side of Lawton.

The drive through Lawton was quite hazardous. Outflow winds and precip rates increased significantly as we approached I-44. Hydroplaning became a serious detriment to quick progress eastward. Logan's skillful driving got us through, though. The best route took us on a hook slice, which we began in earnest as we left I-44 at OK-7 and headed eastward. It took a long time to get through the hook despite its appearance on radar. We must've been moving right along with it for awhile. We did have to take it slow as we encountered occasional damage and strongly wrapping rain curtains immediately in front of us and to our right. Visibility was very poor during most of this stretch, so we really couldn't tell if we were driving into a tornadic circulation most of the time. We frequently switched between strong RFD winds from the
northwest and inflow winds from the north and northeast. Wind speeds were strong enough to suggest there was something present in the rain not far away, strong enough to force us to proceed with caution. Finally we spotted daylight to our east and made a quick dash to pass to the north of a ball of precip that appeared to be rotating immediately to our south.

The environment inside the hook was disappointingly calm. No big wall clouds or strong inflow were noted. Nonetheless we inched east, keeping an eye on the intermittent circulation to our immediate southwest. After a few miles a concentrated area of rotation finally emerged, and I could tell it was strong enough to put down a tornado. After a minute or two a ghostly white funnel emerged from the brightly lit abyss above it. The tornado was probably within a mile, but it was dead quiet. The tornado was small and spits of heavy rain made viewing it less than pleasant, but regardless we were able to watch it writhe eastward. It had impressive rotational velocity aloft, especially as it roped out. This was one of the prettier rope stages I had ever witnessed; it helped being so close. Unfortunately the tornado only lasted 3 or 4 minutes and we lost the very last bits of it in the trees as we moved east to reposition. Still a pleasing event to unfold considering we thought we had busted a few hours prior.

(Above) That "YES!" moment when you realize something good is about to happen.

(Above) Contrast could not have been poorer on this tornado.

Great chase. Left split structure near Mountain View, tornado near Marlow, back in Norman before midnight. 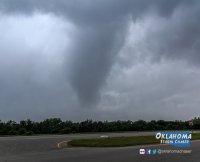