This week has had some very unexpected weather. As you know Illinois was under a hatched 10% tornado risk on 7/13 and not a single tornado came of that. Today there was a 2% tornado risk and the SPC mentioned a low risk of 1 or 2 short-lived tornadoes. But that is not what happened, with a violent, long-track tornado occurring near Cameron. I'm sure we'll hear more about the extent of the damage tomorrow.

I went out with very low expectations today. The Hourly Mesoscale Analysis was showing a very small area with a supercell composite of 16, so that's where I targeted. I waited around near Macomb before picking a storm. They first fired in Missouri but I didn't want to go that far. I was about to go after a storm further north in Iowa but then a better option appeared. A new cell fired nearby and I met up with it near Stronghurst. I was very surprised by how quickly a tornado warning was issued. I saw almost no rotation on radar. And anything I did see was not where I expected it to be, near the updraft. But the base soon appeared and showed some amazing circular structure.

I did not have very good data here. I should have realized based on the storms appearance that it was getting ready to produce. I drove north of Stronghurst and had to make a choice. I could go east after the same storm that may have issues with precipitation hiding any possible tornado. I didn't know that the rotation had tightened up and a tornado was already confirmed at this point. But I decided to go west after an apparent wall cloud. This was a separate line of storms where there appeared to be strong inflow from right to left into a wall cloud along with powerful CG's nearby. This is what lured me away from the tornado, and I regret it.

With rain shafts on both sides I realized I was about to lose all visibility so I started heading towards Monmouth. I turned on the radio and heard about the confirmed large PDS tornado which is the last thing I expected to hear. With the twister slowing down to 15 mph I hoped I could emerge out of the rain and see it. But it wasn't possible. Once I started encountering RFD winds I realized it was time to pull over and wait for the rain to stop. I checked on the town of Kirkwood and didn't see any damage. But traffic on Route 34 had come to a standstill. I found an alternate route on the 164 but encountered many areas where 6 inches of water was covering the road and I was glad to have a high clearance vehicle. As I drove through Monmouth I noticed the whole town appeared to be without power. I'm glad the tornado didn't track north a couple miles or there would have been a lot more damage. I hope nobody was killed or badly injured in Cameron. I considered stopping to help but I didn't want to get in the way and according to the radio all roads to the town were closed.
Last edited: Jul 17, 2015
Reactions: JamesCaruso, Jeff Duda, Winston Wells and 1 other person

I'm sure everyone has seen the stories and the video from last night. Kholby Martin and I chased the cyclic supercell from near Burlington to near Cameron and observed numerous tornadoes (we lost count) including some that were quite large and visually very strong (including at times more than 1 on the ground). I didn't get many photographs personally since I was driving and focusing on that, but here is a video still of one of the tornadoes southwest of Monmouth, at one point we had a satellite on the ground to our south here as well. The Cameron tornado developed east of Monmouth and grew very large quickly (albeit mostly rainwrapped) and impacted town, this is where we ended our chase cut-off by damage. Emergency personal were on scene and we made our way back home. It is one of the best storms I've seen ever locally reminding me of ones we got back in the early 2000's and the chase ranks up there with the best I've had as well.

Large Tornado SW of Monmouth (above) 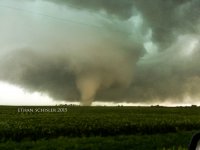 Crappy cell phone pic of another tornado just outside of Monmouth, IL. I got some DSLR video here, I've yet to look over though.

That is just a brief account of yesterday, going to take a while to look over everything and let things sink in. It was a close call for home as well for me, I live only 9 miles from Cameron to the southeast, so quite nerve racking to be that close to home!
Reactions: Jeff House, JamesCaruso, Robert Forry and 8 others

Well, the good news is my 3 year tornado drought is over. The bad news was, I lost complete situational awareness and got us clipped by the Cameron tornado. I've already posted a complete account on my website, but here is a copy/paste of the Cameron experience:

"
At this point we were having all kinds of issues as the storm became HP and was being caught by a line of storms coming up behind it. A menacing couplet continued just to our north, and we got one brief glimpse of very strong rising motion as a tornado developed just a 1/2 mile to a mile to our north.

We had been paralleling the storm along 160th Street, which was iffy at best, and I wanted to find us a better east option to get out of the rain quicker. This was where things got hairy and I began to lose my situational awareness. Even though we had just seen a tornado developing not more than a mile to our north - and an easterly storm component that meant that the tornado would not likely be getting any more than a mile further north of us - I took the next North-South option and decided to head north in hopes of reaching Highway 5 into Cameron, knowing it would be paved and would get us out of the storm.

As we turned north and crept up 100th Street about 3 miles southwest of Cameron the tornado came into view for about 30 seconds. It was large, with a classic liberty bell updraft/rfd clear slot. Rain quickly overtook us and the tornado was gone.

This was where I *really* drop the ball in a way that I just don't understand. The large tornado crosses the road in front of us about 1/2 mile to the north - we flip around and head south back to 160th Street and parallel the tornado again for 2 miles until we hit Hwy 15 which goes straight north into Cameron. Even though we had *just* seen the tornado again for the second time knowing it is just a mile or less up the road - I have us plow north up the road hoping to again hit Hwy 5 in the town of Cameron. Why I think an east option in a town that it about to get hit by a significant tornado wrapped in rain is a viable escape option, I just don't know. It's just like walking up to the front door of a house and seeing it on fire - and then walking around to the back door and walking in. Perhaps after a 3 year drought I forgot how tornadoes work, I just don't know.

As we crept up 140th Street just 1/4 mile south of the town of Cameron, the tornado clipped us as it passed north. Incredible west winds began rocking the vehicle with small debris airborne - in the video below you can hear my dad mention the debris as I recommend we stop to ride out what I again assume is just RFD winds - even thought I had *just* seen the tornado in this area.

As we sat alongside a farm house, an entire shed flew across the road and into the corn field next to us. That sound will be stuck with me forever. The crash sounded like lightning hitting beside the vehicle, until I saw the wad of sheet metal and wood fly into the corn field. I had us pull forward past the farm house so that if the entire farmhouse decided to go we wouldn't be in the immediate path. Luckily we only received a glancing blow as the core of the tornado passed through Cameron about 1,000 feet up the road.

I was still fairly unable to process what had happened until we rolled forward and saw power poles snapped at the base laying across the road, and then the eventual damage inside the town of Cameron. This was actually the first time that I had rolled into a town just minutes after a tornado gone through. As many will say, the smell of natural gas from numerous leaks across town filled the air, with what looked mostly like roof/minor structural damage in the town. It appears that damage got worse as you headed deeper into town, but all north options were cut off and blocked by debris.

Monmouth/Cameron supercell as we approached it from the south:

Video of the chase, including the Cameron experience:

Hey everyone I ended up chasing that day and was sure glad I did. Here are my two videos.
Reactions: Jeff House, John Farley, Matt Magiera and 2 others

Figured I would update my report 6 years later from this day. Observed numerous large, intense, at times violent looking tornadoes across Henderson, Warren, into Knox counties in IL. I think my final count stands somewhere between 8 and 11. I initally believed these to be multiple vortex, but I can no longer claim that to be the case. The hand-offs were extremely quick as each tornado would dissipate and form into a successive larger more intense tornado. Before these photos there were at least 5-6 spin-up and rainwrapped tornadoes that did damage including flipping an 18 wheeler off highway 34 that I assisted on helping the man and then resuming my chase. 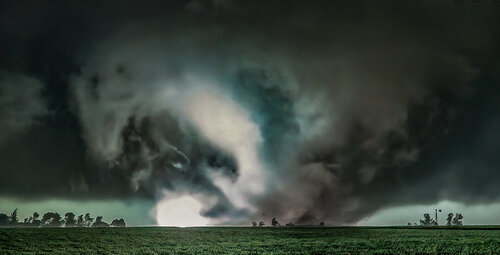 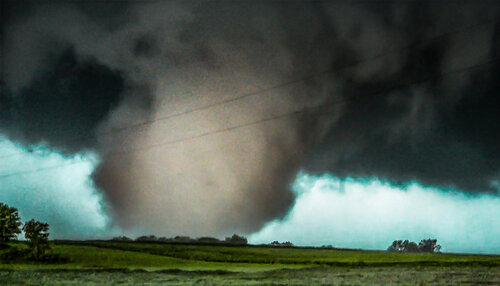 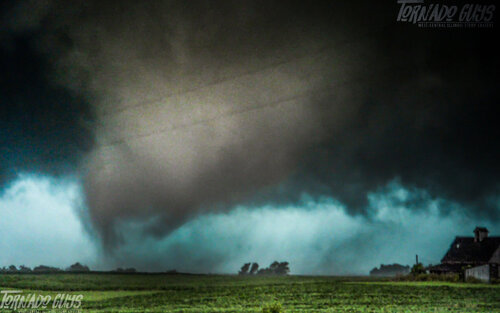 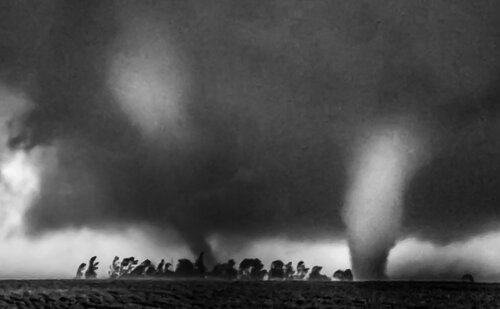 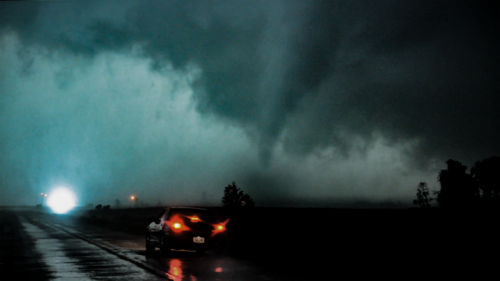 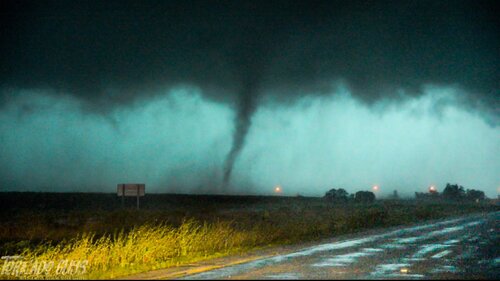 Here are a few of my favorite video stills/photos I took this day. Not even really 40% of the event here, but ST will only let me do 7 photos so here ya go. This is the only chase that has came close to beating Pilger, NE for me since I started chasing in 2003.
Reactions: Jeff House, Andy Wehrle, Bob Schafer and 1 other person

Oh, my...saw this thread bumped and didn't read the year, thought "Boy, I really stopped paying attention to the weather after Wednesday last week!" I chased in IL on 7/13/15 and then was probably PO'ed that this happened on a 2% three days later, so I must have blocked it out of my mind.
Reactions: GPhillips, JamesCaruso and Ethan Schisler
You must log in or register to reply here.
Share:
Facebook Twitter Reddit Email Link
Top Bottom