Made a decent forecast of Central KS and witnessed a beautiful supercell in Hodgeman County, KS. Probably some of the best structure I have ever seen. 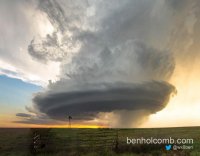 This last image it seemed like we were close to a tornado touchdown if it didn't touch down. Radar doesn't really support this, though.
Reactions: Willoughby Owen, James Wilson, Dave Gallaher and 19 others

Targeted the storm that was forming in Hodgeman County, got under the storm east of Hanston then starting backing up as it was moving south southwest. Kept backing up thru Hanston stopping every mile or so to get out and get a good look, of what I thought was soon to be a tornado producing supercell. Lots of rotation at the cloud base. About four miles southwest of Hanston was sure it was going to happen, rotating rain curtains and back in the rain a large lowering. Called the NWS and they said they were watching my steam, and could see the area I was talking about but radar did not support what I was seeing. Well I geuss think you see a horse does not always mean you are really seeing a horse. 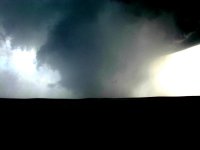 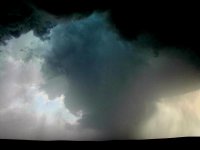 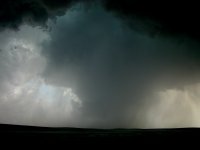 Went chasing with a local lady from Aurora the other day. We went up I-76E thinking that storms would fire and come right to us, however that turned out to not be the case. Ran south out of Wiggins to Bennett where we jumped on a storm heading to Limon.

Over took the storm only to have it fizz out on us as it reached the extreme west section of the tornado watch box, so apparently about 10 miles west of Limon, the atmosphere stabilized, because the tower quickly fell apart and the storm was reduced to nothing at all.

Backtracked to Deer Trail and latched onto another beauty of a storm and watched it till too fizzed out.

after this it got pretty dark and storms seemed to be fading, so called the chased, and grabbed some subs on the way home.
Reactions: Alex Heimberger, Bob Schafer, Michael Towers and 1 other person

Wednesday was the first of 3 chase days for myself. Left Hays, KS early that morning with a target of Cheyenne to Chugwater. Viewed a couple of marginal supercells north of the Guernsey WY area including a baby funnel west of Jay Em, WY. 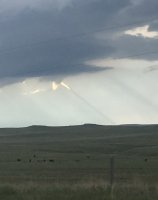 After overnighting in Pierre, SD, I opted for the upslope play in SE Wyoming. The SPC had put this area in a 10% hatched tor, but the outcome was pretty disappointing. After long waits in Chugwater and Wheatland watching anemic storms loiter over the mountains to the west, I (and many others) headed off after an initial cell that moved surprisingly fast to the north of Guernsey. Here's what it looked like very early on from Wheatland. The view here is to the northeast:

Another wait in Lingle followed, and I thought that the show might be over. But a small, discrete storm eventually went up midway between Wheatland and Guernsey, and from my vantage point on a hill just north of Lingle it looked somewhat promising. I took this picture just north of town on U.S. 85. The view is to the west:

I then drove quickly back west on U.S. 26 towards the storm's base, which soon sported a nice, blockly wall cloud. The storm's structure looked good for the next half hour or so, particularly as it was passing over Guersney. The following two shots show the cell's base and prominent beaver tail. I took both from U.S. 26 at the eastern edge of Guernsey, and both look southwest.

I chose not to follow the cell as it moved off to the north and became more disorganized. It still had life in it, though. Several miles to my north the storm briefly had a nice faux funnel and several other scuddy appendages. According to some reports, it might have even produced a brief tornado much further to the north near Lusk after dark. This final picture, which looks due north from U.S. 26, shows one of the storm's scuddy features to the north of Guernsey state park.

I then called it a day and headed back east to Scottsbluff, NE for the night.
Reactions: Michael Towers

Finally finished my chase recap and photo edits from this day. So many images to choose from, posted some of my favorites.

One of five older reports from June.

This was the first day of a five-day chase on the high plains with my daughter. After overnighting in the car near the New Mexico-Colorado border on I-20, we made our way up to Castle Rock and watched for initiation along the front range. Before long, a worthy tower went up to our southwest and got sheared into an impressively long escalator of cumulus.

We repositioned further southeast to the east side of Lake Gulch to get in front of it and watch it develop. Before long, we had a beautifully sculpted supercell over the gorgeous Colorado landscape. This is such an incredible place to watch a storm evolve. 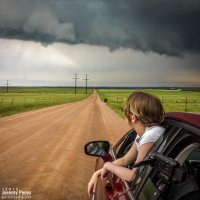 We eventually found ourselves east of Kiowa on Highway 86 as the storm grew more linear and started to wither away.

Further west, another cell had taken over and was looking pretty serious as it moved over Elizabeth. Rotation developed in the base as it drifted eastward, but it never wrapped up tightly enough to do more than that.

We followed it as it started to move more to the northeast getting an excellent twilight lightning show out of it before calling it a day.

Twilight view of a departing supercell from Wilson Creek || 0300 UT