A few pics from the supercell near Clayton, OK. Was hard to find suitable viewing spots but watching the wall cloud move over the edge of Sardis Lake was just about perfect! As I attempted to keep chasing I had to drive behind the hook... there were downed trees and plenty of dirt debris. Entirely possible there was a short-lived weak tornado while I was in pursuit but didn't spot a funnel cloud... but saw plenty of rotation!

Despite still not showing up on reports for the day, and those a mile either side of me not being able to see it, there was a legit tornado just SSW of Inwood, IA likely came across right at the SD/IA border. It was just in the high shear zone of a otherwise meager storm, but with bases sub 500 and inflow at a sustained 35kt 090 it didn't take much to spin up weak but erratic tubes...It initially started with a fat stovepipe forming rapidly with a skinny tube 1/4 or so away on ground at same time, they only lasted a few seconds and by the time I got the cameras out and running they had dissipated, but then this cone reformed. Nothing spectacular but so close to home and such a marginal day I was pleased.

Got on a tornado near Texas Motor Speedway in Argyle/Denton TX area after it crossed I35W.


Chased the stuff further south down by Meridian and Whitney, TX west of Hillsboro. Stayed in the cage most of the time the storm was west of I-35 even with the crappy road network. Got cut off by roads and traffic at I-35 and I guess it produced just east of there. Figures.
Reactions: Bram

I finally convinced myself yesterday that it would be worth it to chase. I got a late start but it worked out pretty good. I left Tyler, TX around 4 PM and met the supercell as it was near Hillsboro, TX. The storm was an HP beast and since I was chasing solo and I didn't want to get into any hail/precip I was unable to see the tornadoes that were reported (Timmer has video). All I had to work with was the PYKL3 Radar app and Google Maps on my phone. However, the storm had gorgeous structure, I just wish I had more light to work with. I left the storm at dark and let it follow me back to Tyler. Sad to hear about the tornado in Van, where significant damage and injuries (2 deaths so far) occurred. I'm glad I went out after not having chased in several years. Hopefully if we get more Texas storms they won't be so HP. Flooding has been significant in many areas, with more rain expected this week.

Not very good good pictures, but here is some pictures of the tornado in Eastern Calhoun County, IA yesterday. My first tornado I have seen visually. I even learned one lesson, don't forget the bigger zoom lens at home. At 0016 UTC we witnessed this tornado just outside Canova in South Dakota. We had headed north to try to keep to the northeast of the low and on the warm front. We were quite suprised that it didn't appear to form from any kind of wall cloud and after reading up on this it looks like it might have been an NST (nonsupcell tornado). There was only one other car of chaers that we could see up that way but would be interested to hear if anyone else saw this and agreed on it being an NST. The storm from which it originated did show visible signs of a rotating updraft (by eye only as nothing noted on GRL). Shortly after the rope out the cell seemed to dimish. I think perhaps it was due to the lack of moisture up that way. Again, would be intersted to hear any one elses take on this. Cheers. 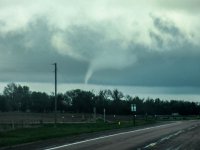 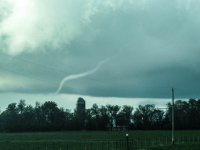 My Sunday: Drove all the way from Norton, Kansas to Sioux City Iowa, racing a huge cluster of thunderstorms up I29 that caught up to us when we stopped to take a piss and get a sandwich at subway (my God they are slow). Got out of the cluster, kept going north on some highway by Sioux City, it was raining nonstop as new convection constantly developed. Called it a chase at 4pm, prepared for the 8 hour drive home. I napped first shift, woke up at about 7 to see a storm popping up out of nowhere about 50 miles southeast of where we called the chase earlier, and of course this fluke storm managed to produce a tornado that damaged a town in Iowa, and I can see from the pictures it was quite photogenic, doesn't that just figure...
TL;DR - Iowa sucks and we went home instead.

I didn't plan to chase Sunday with it being Mother's Day and wanting to stay out of the doghouse (not Skip's doghouse - I'd love to visit that doghouse), but after 2 days on the sidelines due to prior commitments and with severe weather being in my own county (Collin), I couldn't resist. I was awaken by my phone at 6:45 AM alerting me to a Skywarn net in Collin County. A cell had become tornado warned one county west (Denton). I rushed out, but by the time it go to me it was just rain, nothing interesting. I skipped the next two severe warned storms, as they just clipped to far southeastern part of Collin County (which is hard to get to quickly) and they where nothing special. Mid afternoon I noticed a cell forming in Denton County that had promise. I didn't have time to get that far west, so I headed to northwest Collin County between Prosper and Celina. On my way, the storm became tornado warned. I had trouble deciding where I wanted to be, and actually drove back and fort between Prosper and Celina several times, as I was trying to avoid hail and the storm for a while looked like it might make somewhat of a right turn (it didn't). As it took a more northeasterly path, I settled on Celina, which is more to the north. I took this picture as the storm was over Gunter. Spotters where reporting multiple vortexes on the ground in that area, but I never saw that, and the NWS survey didn't support that either. This cell would go on to produce a tornado as it moved into northeastern Grayson County. Limited road options kept me from following it for a while. I finally bit and started to try to get back to the right flank, but it out ran me and all I ever saw with it on the ground was the rain in the RFD. 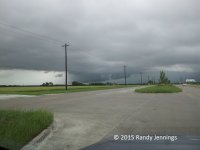 We started the day out in Kearney, NE and made our way east and north towards Sioux City, IA. As we were travelling between Omaha and Sioux City, I was keeping an eye on a cluster of storms moving northward through eastern Nebraska. Made it to Sioux City and decide to head west into Nebraska to watch the strongest looking cell to see if it might do something. We sat near Ponca, NE and watched this cell for a while, but it wasn't looking like much. We couldn't follow it any farther because of the river so we crossed into SD at Vermillion. By this time, the cell we were watching became tornado warned and I'm pretty sure is the one that produced the Inwood tornado. We hung out in the southeastern corner of SD for a while to see if any of the cells moving through would strengthen enough to merit chasing, but this never happened. We did get some pretty strong outflow as a severe cell north of Sioux City collapsed in front of us. We followed some showers a little ways up I-29 hoping something might develop. Didn't happen, so we gave up on the day and started to head back home.

We eventually jumped on US 20 at Holstein, IA, and I decided to check my phone because those clouds in front of us looked pretty interesting. To my surprise, I saw two red boxes about 40 miles in front of us. We switched drivers quick so I could see what was going on, and decided we might be able to catch the southern cell, which at this time was about to move through Lake City. We caught up to the storm after it had already crossed the highway and saw a few funnels as it moved toward Manson. I can't confirm a tornado as it was 5-10 miles away, but there was a report in Manson around this time, so maybe we did see one. We got off the highway, drove into Manson and watched the meso spinning around, but it never produced anything more. We got back on the highway and continued the drive home. Got there around 2am for a good four or five hours of sleep before getting up for work. Considering we had completely given up on the day, I can't believe that we managed to run into what we did, even though we may have not actually seen a tornado.

Here's our video from the Manson storm. Nothing terribly interesting, although some pretty nice structure.