I'm sure there are quite a few chasers who chased on this day. We left Lincoln, NE around 9-10am if I remember correctly. We got on the storm that would produce the Mulvane tornado when it was north of Wellington. We followed it along for hours watching the first needle tornado, then the Mulvane, and Rock tornadoes. Along with the tornados, the storm structure was awesome, especially the explosive growth of an updraft tower around the same time as the Rock tornado. Some picture highlights from the day The storm as it was forming to the north of Wellington Very interesting day for about a million chasers including me!
First intercepted the storm right as it went severe 12 miles north of Wellington.
Caught up with Steve Miller OK and gang just south of Haysville and filmed the "blob effect" and then went on to film the first tornado near 120th and Oliver Rd and then the entire life cycle of the second tornado. Got lucky and was able to film the tornado just as it hit the Landers house (about 100 yards away) south of town. Pics are below. I decided to leave the storm early to get video to media and did not see the Rock tor.
Also of interest is how things set up this day, If I remember correctly this was a true dual dryline event making nowcasting a little more difficult for some.
My "target town" was actually Haysville so we certainly got lucky. As most people already know this storm was very photogenic and photographed by many people including Eric N.....certainly a day I will never forget!

My video clip of this unforgetful day capturing life cycles of both Mulvane and Rock (compressed into timelapse):

Here's my summary from this event. Definitely a top-5 for me:
http://www.passiontwist.com/61204chase.htm

Mulvane was my first really successful chase day. I was out the year before on May 4, 2003 in SE KS with a friend from work and his wife. We followed the initial Girard/Franklin, KS tornado. However, we quickly lost site of the initial touchdown in the forest and then immediately became stuck behind damage. So we missed the better part of the tornadoes as they moved east. By 2004, I was quickly becoming a derpy SPC chaser and it was dumb luck that I even saw the Mulvane storm. I remember the Mulvane storm for its awesomely slow storm motion of maybe 5 mph, super high base and visibility, and fantastic storm structure. After enjoying the nearly stationary storm for 20 minutes or more, it finally began to produce. I'll see if I can't find my old footage and post to youtube. The tornado footage isn't anything new, but I sat just east of the storm base for at least 20 minutes and the structure was mesmerizing.

I do have some vidcaps. I didn't even own a still image camera in 2004. Sorry about the annoying copyright stuff. I quit doing that ages ago. 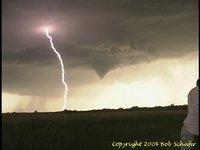 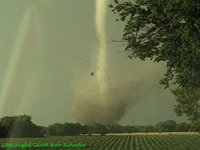 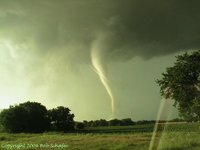