12Z GFS today brought the low a bit further south, down into S KS / N OK as it passes east. This likely means that the MO-Valley area will see mostly or all snow rather than a rain/sleet/snow mix as previously indicated in prior runs. Models have been pretty consistent with the strength and moisture of the low, but the North / South position and timing is now in question. Q-Precip over W KS is probably overdone at 2", and 1.5 near Omaha, up into IA and MN. Keeping with 10to1 or 12to1 ratios means most of the area will probably see 8-12", however if the GFS precip isn't overdone, we could see areas in the 18-24 range, which would be pretty remarkable.

Unfortunately we can't be more certain about amounts until roughly Saturday, when NAM will give us a better idea. Euro model seems to be agreeing with GFS so far, so confidence in some sort of winter event is high, but the magnitude is still quite unsure, obviously. Keeping with my love of GFS, it's really aggressive with WAA all day Tuesday. I've got the impression there will be a TROWAL setting up over a line from Goodland-Lincoln-Omaha-Des Moines. Strong winds are almost a sure bet right now, so even a moderate snowfall <8" could spell major blizzard conditions for some time.

Stock up on your bread and milk this weekend, the stores around here will be empty by Monday. Snow removal in Omaha has been non-existent the last couple of months, so if a big storm does hit, expect school and business closures on both Tuesday and Wednesday.
Reactions: Mike Marz and Steve Miller

Our fabulous Mayor of Omaha is letting us get 6 new plows though.... not that it will help with this storm. If we get 18-24 it could be the end of the week before we get dug out the way our lack of snow removal has gone.

It's pretty awesome how long the GFS has been on this system. As people have been mentioning on social media, it is true that since hour 384 this storm has been extremely consistent. I even joked with some co-workers when I first saw this thing back on 384 that we were going to get a foot of snow during super bowl week. It has wobbled back and forth a bit with the exact track of the low, and that will obviously play a huge part in what areas get the largest snowfall amounts. I really wouldn't mind seeing the track shift back north like the 18z GFS run had it on 1/26/16. That specific run blanketed Minneapolis with fairly extreme snowfall totals. I am not a huge fan of Iowa getting pummeled by snowstorms in the weeks before spring because that snowfall down there greatly impacts our temperatures up here... So it should be interesting where the models take this thing over the next few days, but I wouldn't be surprised to see the low track continue trending south, which is sadly not what I would prefer.

On the other hand, this system could have a fairly decent severe potential with it as well. Something to keep an eye on moving forward.

The South will likely see severe weather as highlighted by SPC's day 7 outlook. But the last 3 runs of the GFS also shows potential further north along the warm front in Illinois. The 0Z shows the snow lifting north into Minnesota from Iowa. Just as long as we get one or the other, a big snowstorm or severe weather I'll be happy.
Reactions: Ethan Schisler

I like that the 00z GFS is coming in a bit further northwest with this, showing surface temps pushing into the 60s into Central Illinois now and even some surface based CAPE. These high shear, low CAPE situations are always tricky, so it will be interesting to see how this one pans out, if it even comes into fruition at all. My birthday is just 6 days after this, so it would be nice to start the year the way I ended 2015, with a tornado in my home-state. I can dream, right?

Since I can't chase the warm sector, I'm focusing my attention to the cold side. Per the 12z GFS the upslope snow potential along the CO front range could be significant! Over 12 hrs of strong uslope flow with ample moisture. 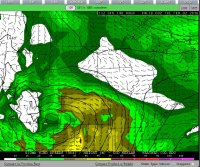 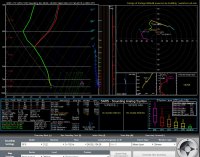 This sounding location is approximately Denver.

Crossing my fingers! Still a ways out though, much can change.

I have a feeling and it is just a feeling that the Chicago metro area will be on the southern edge of the heavy snow bands... but just south of the Chicago metro area I think is going to have some very heavy flooding rains and possibly some severe weather. it will be interesting to see what track this system takes since at 5 pm cdt it looks like the snow sector moved slightly south which puts the northern part of Chicago and cook county in line for some snow accumaltions.

GFS has been quite consistent with the swath of heavy snow in the past several runs and its holding it up just 50 miles to my northwest. The GGEM on the other hand is way southeast on the track and gives my area quite a bit of snow. Hopefully the track will be able to inch southeast in subsequent runs, we haven't had a decent snowstorm yet this winter (aside from the Nov 21-22nd one)..

Before this storm gets to the plains, it could produce some pretty spectacular snow totals in the mountains. GFS and NAM are in good agreement on showing 2-3+ feet of snow in the San Juans around Wolf Creek Pass in Southern Colorado, and NWS forecasts are for 2-4 feet in that area. NAM and GFS also in good agreement on over a foot, maybe close to 2 feet, in the Jemez and Sangre de Cristo Mountains in northern NM. With gusts of 50-60 mph along with this heavy snow, various mountain passes could close and avalanche danger will be high. I have not seen any mention of thundersnow yet in the forecasts, and it is not really the typical time of year for that, but with such warm air ahead of the storm and such an intense storm, I am wondering if it could be a possibility in southern CO and northern NM, areas where it is relatively common compared to other parts of the country. Looks to be an interesting few days coming up.

Forecasting From Omaha aka Ground Zero for Snowmageddon 2016: Plains Edition. Jim Cantore was seen on a plane flying to Omaha, so things just took a turn for the worst.

NAM is forecasting 1" of liquid or 12" snow, GFS is a bit heavier with up to 1.5" in omaha or 18". NAM 4KM High Res also shows near 1.5" in Omaha. Areas between Lincoln and Hastings could see more than 2" or 24" of snow. Based on mixing ratios and temps we're looking at a solid 12to1 ratio, but if we get a little cooler/drier air with that mid-level punch and more dendritic snowfall, we could see more.

The TROWAL is forecast to setup just the models predicted a week ago, somewhere just NW of Omaha. High res-models are showing possible convection moving out of KS and into the snow-zone, making the threat of thunder-snow quite real. We've already got a rain/snow mix southwest of Lincoln, trying to fight the dry air at the surface, so this party might get started a lot faster than we predicted. Winds are already starting to pickup and the forecast for 35mph sustained with 50+ gusts is looking clocked in. Blizzard warnings are up NW of Omaha, they have kept just storm warnings in Omaha. I think this is a mistake, as we get storm warnings all the time, but we haven't had a blizzard warning since the Cat-5 RSI blizzard of Christmas Eve 2009, which this storm may surpass in severity.