I've been researching historical events for a new blog post and I found this event pretty interesting. I also dug up some photos and I figured I'd share them. The Pomeroy tornado killed 71 people and caused damage in four counties across a 55-mile east-southeasterly path. More than three-quarters of the town of Pomeroy was destroyed. Several witnesses described multiple vortices at different points in its path, as in these first illustrations:

There was also a book written on the event not long after, but I can't find it online anywhere. I'll have to see if I can track it down. Oh, and that isn't a dead body in the last photo. That's what I thought at first, but it's a young boy who -- apparently along with his favorite cow -- was the only survivor at his farmstead.
Last edited by a moderator: Jan 24, 2013

I would personally be interested in your perspective of this event.

Studied this event for some time now, as our family farm was in the path and was affected by this event. My great-granddad was in the barn with the hired hand trying to remove a team of horses before it struck. The path went between the Johansen's farmstead to our north and our farm to the south in a E/SE direction. The Johansen's son was a hired hand on our farm. He failed to get the horses out in time and was killed; his body was found nearly 3/4 mile away up in a tree along with the horses IIRC. The barn was mowed to the ground. My great-granddad barely escaped death himself. There is a part in the written account about 'Frank Wadsworth' and it all took place just SW of Alta, IA on the tornado's way to Pomeroy, IA.

The 'Story of the Storm' could once be found on the internet; now it seems to have disappeared.

The base of the tornado between these two farmsteads took up nearly the entire space between them. Just about a quarter of a mile distance. The account is an interesting read. Of course, what passed for science in those days concerning weather was indeed sketchy at best. So the account reads with some strange observations. But quite an interesting read nonetheless. Kinda cryptic at times. Some very strange and ironic things did happen. Please let me know what you come up with.

Our farm is still there and I go to it yearly to take care of the farm business for the family. Barn had been rebuilt many years ago; but it is not nearly as nice as the original barn was.
Last edited by a moderator: Jan 25, 2013

Oh wow, that's really interesting Rob. I've found a few things so far and I do recall reading the names James Wadsworth and Bernard (or Barnard maybe?) Johnson. Do those names mean anything to you? Maybe the same folks you're talking about and the names just got confused up somewhere along the line?

I've also read that vegetation was scoured from the ground, large trees were debarked/denuded and uprooted, and a number of victims were thrown great distances. I think it's pretty safe to say it was a rather violent tornado. According to the Weather Bureau it was the most damaging since the Grinnell tornado of 1882. They also noted something sort of odd in that the three most devastating tornadoes they'd ever recorded in Iowa (one in 1860, Grinnell in 1882 and Pomeroy in 1893) all moved in the same east-southeast direction.

Anyway, here are surface maps from 8am and 8pm that day. I'd imagine instability was every bit as large as you'd expect for July. Temperatures reached 88 degrees and most described the day as sultry, oppressive, sticky, etc. It definitely looks like there would've been plenty of moisture to work with. I'm gonna continue researching, but if you happen to know more of that story, or any other interesting tidbits, I'd love to hear it.

It was also apparently very wide. Some sources mention only 500 yards, but others claim the area of "complete destruction" ranged from half to even three-quarters of a mile. Maybe the multivortex nature of the tornado accounts for that, because in many areas there were apparently three or four distinct damage paths associated with the various vortices.
Last edited by a moderator: Jan 24, 2013

Yeah my great-granddad was named James; Frank was his son.
Duh; either I had a senior moment or this cold in my head is fogging me up.
Prolly both; sorry about that.

'Bernhardt Johansen' was the name I heard.

There were so many people of Scandinavian descent living in that area that were 'fresh off of the boat' at that time. The reporters account of 'Johnson' and/or 'Johansen' would have been dependant on who he was talking to at the time. I believe my Dad said the name was 'Johansen'; so I'll stick with that until proven otherwise.

Fantastic finds on those maps!
Last edited by a moderator: Jan 25, 2013

Didn't find the original printed copies; but these are decent rendering of the written text.

Like those first two drawings you found in your first post; that is the first time I'd seen those.

Think there was a mention of one fellow in those accounts that broke his jaw and arm as a child in that event. My Dad, brother, and myself met and visited with him at the the Odd Fellows home somewhere in that area back in 1966 (I was about 11 at the time). He talked about the event with my Dad, but I cannot remember any details about it. He was one of the last survivors of that storm. Can't remember his name anymore. Might have been Jerry Pruden, Prudents, or Prudence. Something like that . . .


EDIT:
For a hoot, I dug up this old picture of great-granddad/grandmother in front of the farmhouse a year before the incident. To the right of the picture is the N side of the house; the barn was just ~120 ft N of that. That house also sustained some damage on its NW corner and needed some major repair. That tree in front of the house still stands today.

I do know that many of these original homes in this area of Iowa were pre-fabbed and brought in by railway and bought through a catalogue. Our house was too. They were built to last. Just completely renovated this house last year; so I gave a close inspection of the inner framing and construction techniques used. Very stout build. From some of the accounts of total destruction along the storm's path, I would venture a guess that it had to have a minimum of EF-4 wind force. The accounts stated that the force of the storm strengthened as it approached Alta; even though the worst destruction was in Pomeroy.
Last edited by a moderator: Jan 26, 2013

Yep, that's the same link I found today. I'm gonna keep looking for the original, hopefully with the illustrations, but the text itself is fascinating as well. I'm gonna do some more searching through newspapers tomorrow to see what I can find. I'm actually pretty impressed with the amount of information and photographs/illustrations from this event.

I'd have loved to talk with that man, I'd bet he had quite a story! Oh, also, if you ever want to find older surface maps you can get them here:

The archive goes back to 1871, it's been a very valuable resource for me. You'll need to download a program to open them with, but then you can export the maps to .bmp files.

The 1977 book (ISBN 0-8138-0365-9) - Tornado- Accounts of Tornados in Iowa - by John L Standford, has an account of the Pomeroy tornado from pages 43 - 52. Very interesting reading about Iowa tornados. Long out of print but might be avaiable used from Amazon , ebay, etc.

Thanks Jon, I'll have to see if I can find it somewhere. Maybe my library can track down a copy if I can't find it on Amazon. I haven't been able to find any more photos, but there were tons of newspaper accounts written in the days after. Some of it is pretty amusing with its inaccuracy, but there's a lot of good stuff as well.

Just wanted to update this thread. I'm working on a blog post about this tornado that should be done soon, but in the meantime I figured I'd share this. Using the excellent sources available I plotted all the damage locations that I could confirm (marked with white circles) onto a map from that era, and I used the plots to draw a rough path of the tornado. Most official sources state the path was 55 miles in length, but using the first and last known instances of damage it looks as though the path may actually be closer to 65 miles.

Well, it seems like it took forever but I finally finished my blog post. There are a lot of pretty incredible reports out there about this tornado, so I tried wherever possible to confirm each report with at least two sources. Nineteenth-century information is still a bit suspect, but I feel pretty confident that everything in my post is accurate. I think the Pomeroy tornado makes a pretty good case for being among the most intense on record, some of the things it did were just incredible. I also found it interesting that the setup for that day very closely resembled the idealized tornado setup that I'd read about in a study of significant tornadoes in Iowa and Nebraska. I lost the paper but I'll see if I can find it again. And as I mentioned earlier, I think it's also interesting that the three most violent Iowa tornadoes of the 1800s -- 1860 Camanche, 1882 Grinnell and 1893 Pomeroy -- all had a northwest-to-southeast movement. Several other significant tornadoes in Iowa have traveled in that direction as well.

Thanks, Rob! I actually may have a source for a couple more photos from this event, so I'm hoping it comes through. I've been in contact with someone whose family has lived in Buena Vista County since the late 1800s and they said that they have photos from an old tornado. They said they aren't sure when they were taken but that they seem to be of the right period, so I'm hoping to receive them soon. With any luck I'll be able to verify them.
Reactions: Rob Wadsworth

As a point of interest as to my family farm property in Alta Iowa.

Yes, the barn was once again destroyed by another tornado when it twisted and wrenched the roof of the barn. This barn is made of mostly stone; but its attachments to the roof had been ripped away and turned. The north wall has been separated and has broken (not shown). The original barn was made of wood and was leveled by the 1893 tornado. This tornado was reclassified from being 'strong winds' to tornado damage by the county emergency manager. Other homes damaged nearby were also reclassified as such too. Of course, this tornado was not nearly as strong as the original 1893 twister. 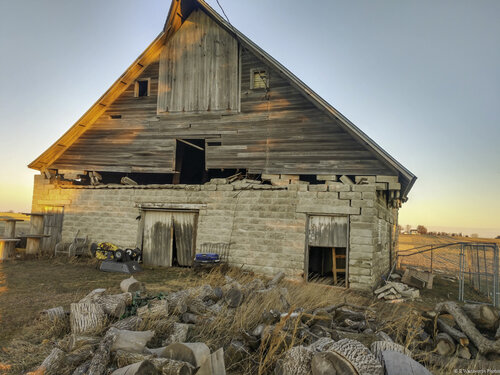