Super late reply (sorry!) ... But here is my report on this storm. When I intercepted it in the FL Panhandle coastal areas, it was a hurricane at landfall. Details are below...

Summary: This area shows the interception of Hurricane Hermine in the Florida "Big Bend" area / panhandle from August 31 through September 2, 2016. The storm made landfall near Alligator Point (Saint James) during the late evening of September 1, 2016 and into the early morning of September 2. Hermine began as a persistent wave that originated off the coast of Africa, and moved across the Atlantic basin, only to develop while it was in the SE Gulf of Mexico. The storm moved northward, then northeastward, becoming a tropical storm, then a hurricane, and making landfall at category 1 intensity (roughly 80 MPH) near and slightly east of Alligator Point, Florida during the night of September 1-2. The storm weakened over land, and eventually moved up the US Eastern Seaboard, and became extratropical off the mid-Atlantic / Northeastern USA coast. The storm weakened thereafter during the week of September 5-9. 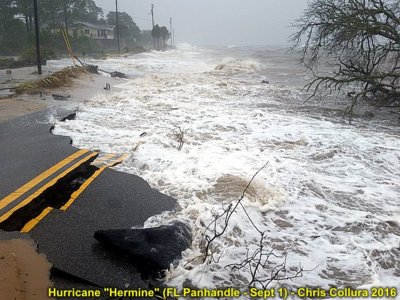 This is the scene on the east side of Alligator Point, Florida (near Saint James) during the afternoon of September 1, 2016 as hurricane Hermine approaches. High surf and rising storm surge (8 to 12 feet above normal in some areas during the peak of the storm) cause an already storm damaged road to collapse into the Gulf of Mexico. This drives home the point that it simply is not a good idea to stay on a barrier island with a hurricane rapidly approaching. 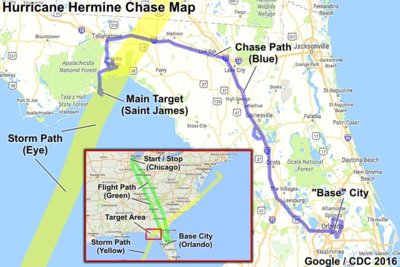 The chase map above shows the full overview of the chase of hurricane Hermine (lower inset) as well as the chase track across northwestern Florida and the panhandle areas. In the inset, the flight to and from Chicago / Orlando on August 31 and September 2 is shown in green. The base city is Orlando, Florida. On the main map, the chase track appears in blue, with the main target area in the Florida panhandle near Alligator Point / Saint James southeast of Apalachicola. The path of the storm core and eye is denoted by the yellow path. The hardest parts of this chase, ironically, were trying to get out of Orlando, Florida on the 31st of August, and returning there on September 2 with I-75 closed (due to an accident and diversion) near Miconopy, FL and a slow leak in the tire of the rental vehicle. The vehicle used was a 2016 Nissan Versa, and a total mileage of 688.3 was put on it from start to finish.

The images above show the latest (22:15z) visible satellite late in the day on September 1 (left) and the radar presentation (base reflectivity) of the storm approaching the Florida panhandle coast (right). The eye of the storm was well developed as the storm was southwest of Alligator Point, and sported an elliptical shape as the storm packed winds near 80 MPH. In the right image, the red line across the screen is the edge of a tornado watch box, and the white circle is my GPS location at the time on the coast to the top of the image. Green dots are storm chasers.

Video of Hurricane Hermine is below... 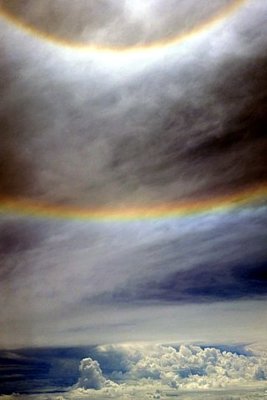 Above: The first view of the outskirts of Hermine was a beautiful deck of cirrus clouds, with two brilliant halos around the sun, while flying into Florida at high altitude from Chicago to Orlando on August 31, 2016. Note one of the outer spiral bands of Hermine looming over the horizon at the bottom of the picture. 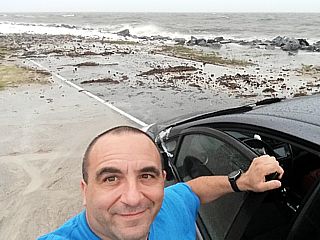 Above: Here is a picture of myself and the rental chase vehicle after arriving in Alligator Point (near Saint James, FL) during the late morning / early afternoon of September 1, 2016. 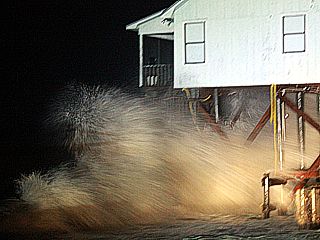 Above: Strong winds to 80 MPH and rising surge waters (around 10 to 10:30 PM on September 1, 2016) battering beachfront homes on the Gulf od Mexico in Alligator Point, FL. 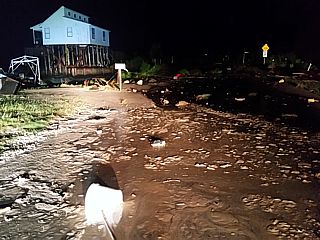